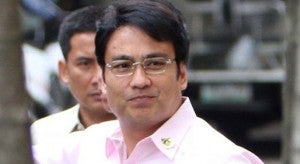 MANILA, Philippines–Justice is catching up with accused plunderer Sen. Bong Revilla, with a forensic investigation into his and his family’s bank transactions from 2006 to 2010 indicating that he received kickbacks from the pork barrel funds he channeled to bogus foundations controlled by Janet Lim-Napoles as exposed by whistle-blower Benhur Luy.

The Anti-Money Laundering Council (AMLC) report on Revilla’s bank transactions involving his Priority Development Assistance Fund (PDAF) also showed discrepancies in his official cash declarations that could indicate “concealment of unexplained wealth”; P87.626-million deposits made in the personal accounts of Revilla, his wife, Cavite Rep. Lani Mercado, and his children, and some of his siblings that tended to confirm his receipt of the kickbacks; and more than P40 million in suspicious funds were poured into a dummy corporation, Nature Concepts Development and Realty Corp., controlled by his wife.

The AMLC said the deposits and withdrawals from the bank accounts of the five foundations corresponded with the names, amounts and dates in the entries made by Luy, Napoles’ finance officer, in his ledger of Napoles’ cash and check disbursements, one of the evidence in the P10-billion pork barrel scam case.

“Considering all the foregoing, there are indications of money laundering scheme using the aforementioned bank accounts. There is, however, a need to conduct further investigation to determine the extent of the subjects’ participation and identify the other monetary instruments that were possibly involved in the laundering scheme,” the AMLC said in a confidential report received by the Office of the Ombudsman on Oct. 8.

The Ombudsman prosecution team, led by Director Joefferson B. Toribio, presented the report in court as its latest evidence in the plunder case against Revilla.

The report was presented in court through the testimony of AMLC Bank Officer II Leigh Von Santos, who said a similar report involving the PDAF transactions of other accused pork plunderers—Senators Jinggoy Estrada and Juan Ponce Enrile—was being prepared.

Justice Undersecretary Jose Justiniano, an adviser to the prosecution team, said the AMLC report was “important” in proving that Revilla did receive the kickbacks through his aide Richard Cambe.

“When we took up the case, we did not know the extent or who would be included, we had only Luy’s testimony and files to work on,” Justiniano said. “The lifting of the bank secrecy law definitely strengthened our case because we are now talking of documentary evidence and not only testimonial evidence.”

Justiniano refused to echo Justice Secretary Leila de Lima’s description of the evidence against Revilla as “slam dunk,” as he preferred to leave the assessment of the evidence to the court.

They used JLN Corp. IDs to identify themselves in withdrawing the money, thus establishing a link between Napoles and the foundation.

The deposit accounts were used as temporary repository of funds since the money was immediately withdrawn practically on the same day it was deposited.

And all withdrawals were made in cash despite the huge amounts involved—as much as P35 million in one day.

Based on the AMLC’s forensic investigation of Revilla’s and his family’s joint bank account transactions for four years, from April 6, 2006, to April 28, 2010, the Revillas made a total of P87.626 million in various bank deposits and investments within 30 days from the dates recorded in Luy’s ledger.

Luy claimed that the “rebates” of Revilla were received by the senator’s senior staff member Cambe, coaccused in the plunder case.

The investigation covered 81 bank accounts that were allowed to be opened by the Court of Appeals on May 28 and Aug. 15 this year.

“This fortifies the veracity of the contents [of the] ledger. According to Luy, the foregoing withdrawals were used to fund several cash disbursements of [Napoles] from 2006 to 2010, including the cash given to Revilla through Cambe totaling P224,512,500,” the AMLC said.

Justiniano explained that the AMLC did not include deposit accounts Revilla used for his “legitimate” earnings as a movie actor and television personality.

“It’s hard to think that the cash deposits he made were legitimate because the amounts involved were huge. If the source of the funds were legitimate, these would have been deposited through checks and not cash,” Justiniano said.

The AMLC said this was “an indication of concealment of unexplained wealth.”

But Justiniano said it would be “overkill” to file a case of unexplained wealth against Revilla, as the plunder case was more than enough to put him in jail if convicted.

The AMLC investigation also uncovered a total of P27.745 million in funds deposited in 2010 in the account of Nature Concepts, a real estate firm formed by Revilla’s wife, Representative Mercado, in March 2006 with a minimum paid-up capital of P62,500.

The company did not file financial statements with the Securities and Exchange Commission from 2007 to 2010, the AMLC found.

The AMLC said the firm’s incorporation papers and other corporate documents were notarized by Joel G. Gordola, the same lawyer consulted by Napoles in forming some of her bogus foundations.

Justiniano said there was no plan to charge Mercado with plunder, even if she is a public official, because she was not included in the charge sheet.

The AMLC said the investments and bank accounts were “terminated immediately before and after the PDAF scandal circulated in [the] media.”