Aquino unhappy with delays in rehabilitation of ‘Yolanda’-hit areas 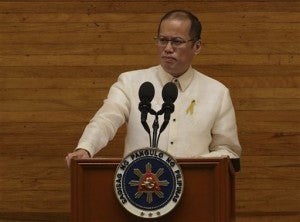 Aquino said he was pushing state agencies to finalize a P160-billion plan to build new homes for tens of thousands of typhoon survivors and restore vital infrastructure.

“I am never satisfied,” Aquino told a foreign correspondents’ forum when asked if he was happy with the pace of the rehabilitation work.

“I wish everything that had to be done were done in one year, but that may be an impossibility,” the President said.

Yolanda brought winds of 315 kilometers per hour, the strongest ever to make landfall, and tsunami-like storm surges across central Philippines in November last year, leaving more than 7,350 people dead or missing.

The master plan, which aims to build 200,000 new homes, was presented to President Aquino in August. But he has yet to approve it, insisting first the plan be more detailed and have clear timetables for rehabilitation projects.

“I want specifics. This project will happen at what time for whom, costing how much,” he said.

Aquino said plans to build the new houses had been delayed by a lack of suitable sites that were safe from storm surges.

“We might have the funds, we have the materials already but we don’t have the land,” he said.

The similar problems with location hindered plans to construct a new airport in the region after the site proposed by a 2008 government study was found to be vulnerable to storm surges, he said.

The current major airport in the region, in Tacloban City, has been closed to jets since September after being damaged by the typhoon, closing off the major air route for vital supplies.

The President said he expected the airport would be open to jets again next month and voiced frustration at the closure.

“Sometimes, it gets to be absurd. For instance, why is the runway in Tacloban not yet ready?” he said.

Aquino, however, was optimistic for the longer term as he acknowledged that rebuilding was a “multi-year” effort.

“We think it will be substantially completed by the time I step down, bringing back the communities, not just back but really better,” he said.