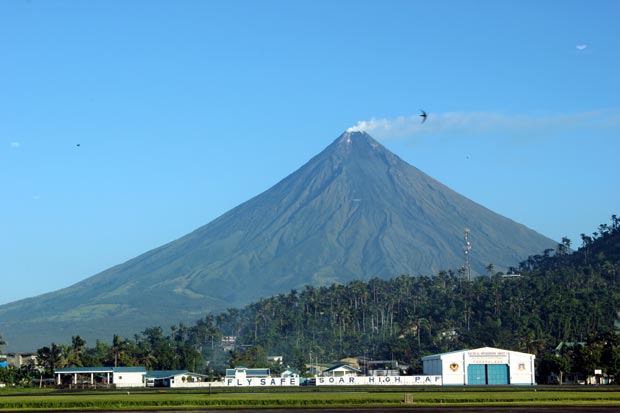 According to Eduardo Laguerta, resident volcanologist of the Philippine Institute of Volcanology and Seismology (Phivolcs), “…the lava flow could be an indication of an imminent eruption, just like in 1984, when after the lava flow had been spotted, within two weeks the volcano erupted.”

Laguerta said the flow, estimated to be 400 meters long and 100 meters wide, “flowed at the west side of the crater if you are looking at the Bogña channel.”

The Bogña channel is part of the southeastern section of Mayon volcano that faces Legazpi City and the towns of Daraga and Sto. Domingo.

Laguerta said because of the lava flow, new ash deposits were noted on the slopes of the volcano. He added that the magma that came out were the old deposits from the previous eruption.

The first lava flow, which was 350 meters long, was recorded a week earlier, on Oct. 12. It was the first flow since Mayon started getting restive on Sept. 15 and alert level 3 was raised, prompting the evacuation of some 54,000 individuals living within the six-kilometer Permanent Danger Zone (PDZ).

Two volcanic quakes were also recorded over the past 24-hour period, while a faint crater glow had been observed Sunday night. Sulfur dioxide emission was recorded at 272 tons a day on Oct. 19.

Meanwhile, three school divisions in Bicol canceled the semestral break in the elementary and secondary levels to make up for the disruption of classes caused by the volcano’s state of unrest.–With a report by Jeannette I. Andrade

Read Next
Palparan may stay where he is, court rules
EDITORS' PICK
UK’s Boris Johnson will resign, BBC reports
Unemployment rate up to 6% in May
Geek out at TOYCON 2022 powered by Smart Signature
High inflation: Your P1 is now worth only 87 centavos
High-risk pregnancy: Reducing your risk is in your hands
House energy committee chair Arroyo bats for cheap electricity
MOST READ
Suspect in grisly killing of missing woman in Bulacan arrested
Kim Atienza’s daughter flaunts bikini body in response to critics of her ‘revealing photos’
Number of active COVID-19 cases in PH breaches 11,000
Ex-Defense chief Lorenzana is the new BCDA chair
Don't miss out on the latest news and information.