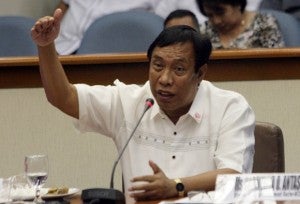 The outstanding balance was reflected in a letter dated April 1, 2014, signed by BSP national treasurer Enrique B. Lagdameo and senior vice president Wendell Avisado, to the BSP board of directors.

“Rest assured that we shall faithfully stand by our commitment to pay your firm from the proceeds of the Voluntary Offer to Sell (VOS) covering our remaining property in Compostela Valley. In the meantime, we shall continue paying your firm the amount of P1 million every month in order to gradually reduce our outstanding balance,” the letter said.

The letter also said the terms of payment were in accordance with the decision of the BSP executive committee.

In an interview with the Inquirer, Mercado corrected his earlier statement that the cost of the luxury hotel was between P60 million and 65 million.

“It was the collectible amount after it was constructed but the whole project cost P121 million,” Mercado said.

He also said the building was turned over to the BSP more than two years ago.

He added that after his falling out with Vice President Jejomar Binay, the long-time president of the BSP, “it became very difficult for Twinleaf to secure payments.”

“We were only able to collect after more than a year and up to now we still have to be paid fully,” Mercado said.

Mercado, the principal witness in the Senate blue ribbon subcommittee inquiry into alleged corruption in Makati when Binay was the city’s mayor, advanced the money for the construction of the hotel in 2009 in exchange for Binay’s support in his planned campaign for the mayoralty in 2010.

A Makati City ordinance dated June 22, 2009, showed that the city council appropriated P10 million for assistance to the Philippines’ hosting of the 26th Asia-Pacific Regional Scouts Jamboree from Dec. 28 that year to Jan. 3, 2010.

The amount would come from the “monthly operating office expenses—special projects” of the Office of the Vice Mayor of Makati City, the ordinance said.

The BSP-International Makiling hotel is tucked away in a leased forest reserve along Jamboree Road in Barangay (village) Batong Malake.

At the time it was constructed, Mercado was senior vice president of the BSP (he served from 2007 to 2010); Binay was its national president.

Binay remains BSP president. He is the longest-serving president of the 2 million-strong BSP. He was first elected in 1994 and served up to 1996 and was elected again in 1999. The organization’s past presidents held only two- to three-year terms.

Despite the subsequent rift between Binay and Mercado, the hotel was completed “and so the [BSP] board had to allot P10 million [from its funds] every time it had its monthly meeting to pay Mercado back,” the source said.

He also confirmed that the hotel was constructed for the 26th Asia-Pacific Regional Scout Jamboree at the request of Binay.

“When we were still allies, he told me to find a way so that the Philippines, being the host country, would have a scouts facility it could boast of,” Mercado said.

The hotel has a total floor area of 3,070 square meters and it stands on a 57.7-hectare property leased by the BSP from the University of the Philippines Los Baños.

Records at the Los Baños Engineering Office showed that BSP-International was issued a building permit only on June 17, 2012. The hotel was categorized as an “institutional” project and therefore was exempted from paying the building fee.