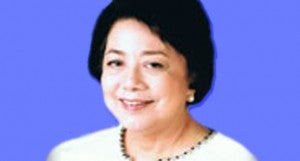 MANILA, Philippines—A lawmaker is proposing a more stringent review and compliance procedure in the filing of statements of net worth by public officials and employees to curb corruption in government.

Sorsogon Representative Evelina Escudero has filed a bill seeking to strengthen and update the 25-year-old Republic Act 6713 or the Code of Conduct and Ethical Standards for Public Servants by, among other measures, requiring a stricter compliance process in the filing of the so-called SALN, or statement of assets, liabilities and net worth.

She said the existing law “needs updating to adapt to current situations in public administration, and to keep abreast with international agreements the country has entered into, one of which is the United Nations Convention Against Corruption.”

Escudero cited portions of the law which she said required improvement, such as the definition of “public official,” provisions on the SALN, the system of rewards and incentives, and penalties for violations.

The SALN is a declaration of assets, such as land and vehicles, and liabilities, such as loans or debts, including business and financial interests, of officials or employees, of their spouses, and of their unmarried children under 18 and still living with their parents.

The submission of a SALN is required under the 1987 Constitution and RA 6713. It includes a waiver authorizing the Ombudsman or his authorized representatives to obtain documents that may show assets, liabilities, net worth, business interests, and financial connections from all appropriate government agencies.

Escudero said House Bill 4783 or the proposed “Enhanced Code of Conduct and Ethical Standards for Public Servants” would provide for a stricter review and compliance procedure in the SALN filing.

It would require all public servants to file under oath their SALN with their respective chief or head of personnel within 30 days upon assumption of office; on or before April 30 of every year thereafter; and 30 days before the effectivity date or separation from the service.

Upon receiving the public servants’ SALN and disclosure, the chief or head of personnel shall forward this to a “review and compliance committee (RCC),” which each office or agency shall be required to create under the bill.

The RCC shall be composed of one chair and two members, and shall be designated and authorized by the agency head to receive the SALN and disclosure, determine if this has been “submitted on time, complete and in proper form,” and forward the document to the appropriate agencies.

The bill also empowers the Ombudsman, the Civil Service Commission, and the Commission Audit to “obtain, at any time, all documents as may show the declarant’s assets, liabilities, net worth, and business interests and financial connections, commencing from the time the declarant was employed or engaged by the government, and from all agencies, banks and financial institutions whether private or public.”

In the case of the President, the Vice President, members of the Cabinet, Congress, the Supreme Court, the constitutional commissions and other constitutional offices and officers of the armed forces with general or flag rank, the declaration shall be disclosed to the public on government websites.

The failure of a public servant to correct, complete or submit his or her SALN based on the procedure and within the deadline shall be a ground for disciplinary action and penalties, including suspension on the first offense, and dismissal on the second.

Heads of agencies or offices who fail to comply with their responsibilities pertaining to SALN filing of public servants shall also be liable for simple neglect of duty, also punishable by suspension or dismissal.

The bill defines corruption as “the use of public office for personal gains, which include but is not limited to bribery, extortion, fraud, embezzlement, nepotism, cronyism, appropriations of public assets and properties for private use and influence peddling.”

It is now pending in the committee on civil service and professional regulation chaired by Leyte Rep. Andres Salvacion Jr.