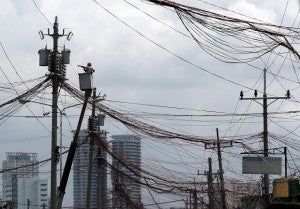 The People Opposed to unWarranted Electricity Rates (Power) said the Department of Energy (DOE) has failed to provide lawmakers and the public with verifiable information on the supposed power shortage.

“The problem with Malacañang’s proposal to allow the President to enter into P6-10 billion worth of negotiated contracts is that it is based on DOE Sec. Jericho Petilla’s mere insistence of a power shortage that is not supported by verifiable data,” Power convenor Teddy Casiño said in a press briefing.

Casiño presented a data from the Philippine Independent Power Producers Association (Pippa) saying there is a “dependable capacity” of 11,667 megawatts of power in the Luzon grid while the DOE figure was at 11,349 megawatts.

Given this data, Casiño said there will be no power shortage in 2015 since the National Grid Corporation said that power demand in summer of 2015 was projected at 8,480 megawatts in March and 9,011 in May next year.

“This means that strictly speaking, there is a buffer reserve of anywhere from 2,388 megawatts to 3,187 megawatts during the 2015 summer months,” he said.

Petilla earlier said that the country would experience a shortage of 300 megawatts to as much as 900 megawatts in summer of 2015 due to the Malampaya shutdown.

Casiño, however, said the Malampaya shutdown during the last quarter of 2013 and eight other power plants but no power shortage was experienced.

“This is why there is no reason why the Congress need to rush granting emergency powers to the President,” he said.

According to him, Petilla should lay down the where his date on the shortage came from.

Aquino to solons: Hurry with my powers