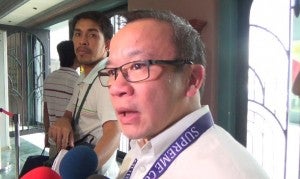 MANILA, Philippines–For the Supreme Court, the rule is clear: Surgical sex change may not be recognized as legal.

Two Supreme Court rulings that dealt with the question of changing the name and sex on the petitioners’ birth certificates were consistent with each other, deferring to the natural course of a medical condition in one case while denying the plea of a transsexual man who had surgically altered his reproductive organs to become a woman.

“The cases you cited are actually consistent with each other because they dealt with the specific issues that were raised,” Te said.

In decisions about a year apart, the Supreme Court ruled that legally changing one’s sex may only be done in rare circumstances, specifically when a medical condition is behind the shift from female to male.

The Sept. 12, 2008, ruling allowed Jennifer Cagandahan to become Jeff, recognizing how his condition—congenital adrenal hyperplasia—changed his gender as a matter of course, as he reached puberty.

The ruling by the Supreme Court’s Second Division, written by then Associate Justice Leonardo Quisumbing, noted that the rare condition had changed Cagandahan’s physiology even while he was born with intersex characteristics, with female parts being dominant. Cagandahan’s male characteristics became dominant when he reached puberty.

“The current state of Philippine statutes apparently compels that a person be classified either as a male or as a female, but this court is not controlled by mere appearances when nature itself fundamentally negates such rigid classification,” the court said.

“Respondent here has simply let nature take its course and has not taken unnatural steps to arrest or interfere with what he was born with. And accordingly, he has already ordered his life to that of a male,” the court said.

In an Oct. 22, 2007, ruling, the Supreme Court’s First Division junked Rommel Jacinto Silverio’s plea to change entries on his birth certificate—his name to Mely and his sex to female. The court ruled that “the words ‘male’ and ‘female’ in everyday understanding do not include persons who have undergone sex reassignment.”

“While petitioner may have succeeded in altering his body and appearance through the intervention of modern surgery, no law authorizes the change of entry as to sex in the civil registry for that reason. Thus, there is no legal basis for his petition for the correction or change of the entries in his birth certificate,” the court said in the decision written by then Associate Justice Renato Corona.

The court also cited the implications of the case on public policy, as Silverio was also known to have taken the legal action as an initial step toward marrying his American fiancé Richard Edel. Under Philippine civil law, marriage may be legally recognized only if it is between a man and a woman.

The term “transgender” is an “umbrella term” for individuals “whose gender identity, gender expression or behavior does not conform to that typically associated with the sex to which they were assigned at birth,” according to the American Psychological Association.

A transsexual person has more specific changes, including “surgery or hormonal treatment in order to make his or her body more congruent with his or her preferred gender.”

“The court has not addressed the status of transgenders nor [dealt] with an issue of a transgender individual,” Te said.

The Inquirer looked back on the two cases amid the investigation of the killing of transgender Filipino Jeffrey “Jennifer” Laude allegedly by Pvt. 1st Class Joseph Scott Pemberton of the US Marine Corps in Olongapo City on Saturday night.