Do something, Laude family urges President 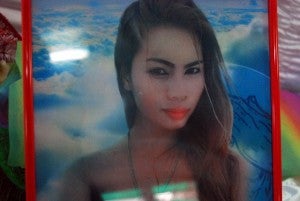 OLONGAPO CITY, Philippines—Relatives of Jeffrey “Jennifer” Laude on Thursday gave the government until Saturday to serve a copy of their murder complaint on a US serviceman whom they accused of killing the transgender Filipino in a motel here on Saturday or they would do it themselves.

Laude’s mother, Julita Laude, also called on President Aquino to do something to ensure that Pvt. 1st Class Joseph Scott Pemberton of the US Marine Corps, the alleged killer who is reportedly being held aboard a US warship docked at Subic Bay Freeport, gets a copy of the murder complaint and stays in the Philippines during his trial.

“We ask the President not to ignore us because we have the right to pursue this complaint,” Laude said.

“We hope the President will help us because if all our efforts in filing this complaint go to waste, it’s like he has thrown us away,” she said.

Olongapo police referred the case to the city prosecutor on Wednesday afternoon. The prosecutor will now decide whether to file murder charges against Pemberton.

The American could face life in prison if convicted in a Philippine court.

Senior Supt. Wilben Mayor, spokesman for the Philippine National Police, said on Thursday that the Olongapo police had evidence and witnesses that would bolster the prosecution of the case.

He said an investigation task force group was gathering more evidence and looking for more witnesses to build up the case against Pemberton.

Malacañang said its position was that justice must be served, but did not say whether it would help the Laudes deliver a copy of the murder complaint to Pemberton.

“The government is steadfast in its determination to get justice for the death of Jennifer Laude. The Philippine government is working closely with the US government to ensure that the ends of justice will be served,” said Communications Secretary Herminio Coloma.

Coloma did not say, however, what the government was doing.

But presidential spokesman Edwin Lacierda told reporters in Cebu City that the Philippines would seek custody of Pemberton according to the provisions of the Visiting Forces Agreement (VFA) with the United States.

Lacierda noted that the case had been referred to prosecutors on Wednesday. Under the VFA, he said, the case should be decided within one year or the Philippines would lose custody of Pemberton.

Recalling the 2005 case involving US Lance Cpl. Daniel Smith, who was accused of rape by a Filipino woman, Lacierda said the Philippines acquired custody of the American soldier because the case was decided in one year.

The Department of Foreign Affairs (DFA) said it could seek custody of Pemberton only after a warrant was issued for the arrest of the US serviceman.

Assistant Secretary Charles Jose, spokesman for the DFA, reminded journalists on Thursday that Pemberton’s case was still under preliminary investigation by the Olongapo City Prosecutor’s Office.

“We will formally request custody once an arrest warrant is issued by the court,” Jose said.

Asked who would serve the warrant if it was issued, Jose said he could not answer the question, as it involved a legal matter.

He said, however, that the DFA was coordinating with US Embassy officials on the case against Pemberton.

An interagency body had been formed and it met on Thursday to discuss the coordination with US officials, he said.

The interagency body is composed of the DFA, VFA Commission, the departments of defense, justice and social welfare and development, the Armed Forces of the Philippines and the Philippine National Police.

Part of the initial discussion, according to Jose, was the establishment of contacts on both sides for receiving information and sending communication.

No help from gov’t

In Olongapo City, Laude complained that nobody from the government had seen her family to offer help in bringing charges against Pemberton, leaving the family make the move on its own.

Laude said she and her family had decided to deliver a copy of the complaint to Pemberton on Saturday should the government fail to do it.

“My family and I will board the ship so we can deliver a copy of the complaint. We will fight because we want justice to be served,” she said. “We deserve help because we are citizens of the Philippines. We pin our hopes on the President as we seek justice. My child is dead. She was killed as if she were a puppy.”

The Laudes’ lawyer, Harry Roque, told a news conference here that no representatives from the government agencies concerned—the Presidential Commission on the Visiting Forces Agreement and the DFA—had talked to the family even after the complaint for murder was filed against Pemberton on Wednesday afternoon.

“We cannot make them answer the complaint if the government will not do anything,” Roque said.

“The family wanted to know what the government would do to ensure that Pemberton would receive the copy of the criminal complaint,” he said.

Roque said he was to meet with Justice Secretary Leila de Lima and Foreign Secretary Albert del Rosario on Thursday afternoon to find out from them what the government planned to do.

He said it was important that Pemberton received a copy of the complaint so the US serviceman could not complain that he was deprived of due process.

Marilou Laude, the victim’s sister and the complainant in the murder case, appealed to people supporting her family to join them in delivering a copy of the complaint to Pemberton should the government not do anything to help.

Roque said the situation was better during the trial of Lance Cpl. Daniel Smith, who was accused of raping a Filipino woman in Subic Bay Freeport in 2005, because all court notices and documents were sent to the US Embassy in Manila after it assumed custody of the American soldier.

But in Pemberton’s case, Roque said the complainants did not know where to send a copy of the complaint because the soldier had no clear address, except that he was reported to be held on board the USS Peleliu, which is docked on Subic Bay.

Marilou Laude said she wanted to meet Pemberton for assurance that he is indeed in the Philippines and that he will face the charges she has brought against him.

The slowness of the government in getting custody of Pemberton has angered party-list lawmakers in the House of Representatives.

On Thursday, the Makabayan bloc in the House filed a resolution calling for the abrogation of the VFA.

The bloc also urged President Aquino to send immediately a notice of termination of the 15-year-old agreement to the US government.

“It is a big slap on the face of the Filipino nation and downright revolting that the government failed to arrest and take custody of Pvt. 1st Class Joseph Scott Pemberton of the US Marine Corps, the suspect in the killing last Saturday of Jeffrey ‘Jennifer’ Laude,” the lawmakers said.

“This incident shows that the VFA is unmistakably an affront to the state’s sovereign power to enforce its laws within its territory and makes a mockery of our justice system,” they said.

Gabriela Representatives Emmie de Jesus and Luzviminda Ilagan said they, too, would file their own resolution for the termination of the VFA.

But the DFA’s Jose defended the VFA, saying that without the agreement, the government would not have jurisdiction over the case of Pemberton and would not have secured the conviction of Smith in 2005.

Jose said the DFA respected the right of the lawmakers to file the resolution.

“But we should bear in mind that if there was no VFA then possibly we won’t even have jurisdiction over this case like when we had the military bases agreement, where there was total immunity [for erring US servicemen],” he said.

Roland Simbulan, a professor at the University of the Philippines, said the Philippines would gain international respect if it could assert custody of Pemberton.

“Unfortunately, our government has a long history of not asserting our people’s rights, especially when it comes to foreigners and the US armed forces,” Simbulan said at a forum organized by Rainbow Rights Philippines and the Scrap VFA Movement at the UP College of Social Work and Community Development.

Under the VFA, Simbulan said, the government can request custody of Pemberton. But also under the VFA, he added, the United States can refuse to waive custody.

Laude’s case highlighted the unequal relationship between the United States and the Philippines under the VFA and also the plight of the LGBT community, forum participants said.

“We do not really want to break the [relations between the Philippines and the United States, but we] want a relationship with mutual respect. If we are being treated like a doormat, [that’s] not a relationship,” Simbulan said.–With reports from Christian Esguerra, Christine O. Avendaño, DJ Yap, Julie M. Aurelio and Erika Sauler in Manila; Connie E. Fernandez, Inquirer Visayas; and AFP

Without VFA, PH won’t have jurisdiction over Laude case—DFA

PH to ask custody of Pemberton once arrest warrant is out