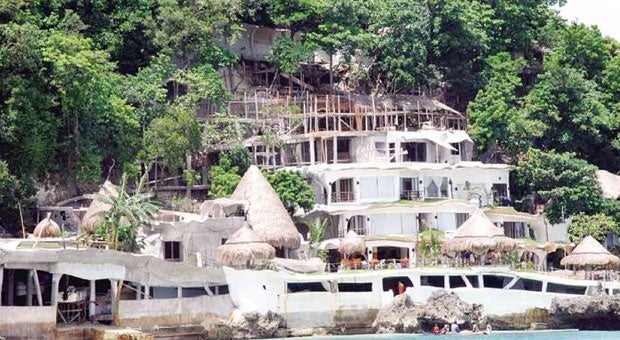 PORTIONS of Boracay West Cove have been demolished for construction in areas outside its lease area. CONTRIBUTED PHOTO

ILOILO CITY, Philippines—The Department of Environment and Natural Resources (DENR) has terminated a 25-year land use agreement with a controversial posh resort in Boracay accused of illegal construction.

A FLAgT allows the temporary use, occupation and development of any forest land for tourism purposes for a period of 25 years, renewable for another 25 years.

The cancellation was sought by the Department of Tourism after the resort allegedly violated the terms of the FLAgT.

In his order, Ignacio said the resort’s violations included building permanent structures in an area measuring 3,159 square meters, which is outside the 998-sq m area in Barangay Balabag covered by the lease agreement.

In August 2011, then DENR Regional Executive Director Julian Amador issued a cease and desist order against the resort for introducing improvements outside the FLAgT area and failing to submit its site management plan and annual report.

But the resort failed to comply with the order and continued developing areas outside the lease agreement coverage, according to Ignacio in his order.

“To emphasize, the construction of permanent structure outside the approved FLAgT area is considered a grave violation of the terms and conditions of the agreement, tantamount to an intentional disrespect and disregard for the authorities,” he said.

Boracay West Cove owner Crisostomo Aquino has repeatedly insisted that he did not violate the FLAgT and environmental laws. He said the local government had ignored his application for permits and accused government agencies of singling out his resort.

The FLAgT was issued to the resort in 2009 during the term of then Environment Secretary Lito Atienza.

Last year, government agencies and the local government of Malay, which has jurisdiction over Boracay, demolished portions of the resort considered illegal structures.

Read Next
Trillanes tells Binay: We’re not done yet
EDITORS' PICK
Smart powers Liga Adarna Season 4: Race to the Top
Duterte orders review of conduct of war on drugs
‘Reporter/commentator’ mauled for stealing fighting cocks
Miss Universe Philippines partners with JC
No evidence to warrant filing of homicide case vs Julian Ongpin – police
Who is Julian Ongpin?
MOST READ
Gordon: Senate uncovered ‘mother of all corruption’ under Duterte admin
LOOK: Angel Locsin inspires with weight loss progress
Isko Moreno reaches out to other presidential bets for unity
Who is Julian Ongpin?
Don't miss out on the latest news and information.