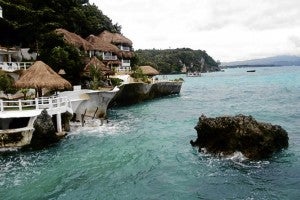 BORACAY ISLAND—In what many believed would have been impossible in Boracay, government agencies demolished illegal structures of a posh resort for encroaching on a no-build zone among various other alleged violations of local and environmental laws.

At least 150 officials, policemen and demolition team members tore down parts of Boracay West Cove past 8 a.m. yesterday in Barangay Balabag at the northern end of the island.

Boracay West Cove owner Crisostomo Aquino first insisted that the demolition be put off because of his pending petition for a temporary restraining order at the Kalibo Regional Trial Court.

The demolition team, backed by 25 policemen, entered the main area of the resort after a 30-minute tense negotiation.

Armed with crow bars and sledge hammers, the demolition team started tearing down bars and lounges at 1 p.m. after surveyors from the Department of Environment and Natural Resources (DENR) determined the boundaries of the property. The demolition was still ongoing past 3 p.m. yesterday.

The demolition drew curious stares from foreign guests of the resort. Employees also watched as policemen, government officials and reporters stayed for hours monitoring the demolition.

The resort will continue to operate on the basis of a case pending at the Court of Appeals against an order issued by the Malay local government on June 7, 2011, for the closure of West Cove for lack of business, building and occupancy permits.

The DENR Environmental Management Bureau said the resort built permanent structures in an area covering 3,159 square meters outside the 998-sq m area covered by the FLAgT.

A FLAgT allows the temporary use, occupation and development of any forest land for tourism purposes for 25 years and renewable for another 25 years.

The resort was also ordered closed for operating without business, building and mayor’s permits.

West Cove became controversial for structures built on rock formations and operating for years without permits.

It has also become known as the “Pacquiao Resort” because it is widely believed to be owned by Filipino boxing icon Manny Pacquiao, a close friend of Aquino. Pacquiao has repeatedly denied owning the resort which he frequently visits.

Aquino denied violating any law. He said he had applied for permits but the local government of Malay failed to act.

Aquino challenged authorities to run after all violators in Boracay, not just his resort.

“It’s a common practice here. Why am I being singled out?” he said.