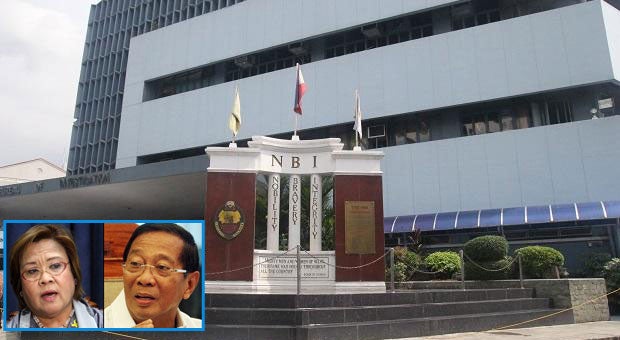 The National Bureau of Investigation will begin probing the alleged corruption in Makati City and other controversies involving Vice President Jejomar Binay (right inset), his family and his associates on orders of Justice Secretary Leila de Lima (inset left)

MANILA, Philippines–Justice Secretary Leila de Lima has ordered the National Bureau of Investigation to begin probing the alleged corruption in Makati City and other controversies involving Vice President Jejomar Binay, his family and his associates.

De Lima said it would be the Office of the Ombudsman that would, if warranted, recommend impeachment cases against Binay in the House of Representatives.

But Binay’s camp wondered about De Lima’s authority to investigate the Vice President and his family over allegations of corruption that were raised in the ongoing Senate inquiry into the Makati City Hall parking building.

“It is a sad day when the Department of Justice (DOJ) is part of the political circus,” Binay’s political spokesman, Cavite Gov. Jonvic Remulla, said in a statement.

De Lima noted that the Ombudsman’s Field Investigation Office was also conducting a fact-finding probe of the allegations of corruption against Binay, his family and associates.

Binay has been accused of taking kickbacks from infrastructure projects in Makati City when he was its mayor and of owning a P1.2-billion high-end farm in Rosario, Batangas province. He has snubbed the invitation of the Senate blue ribbon subcommittee looking into the allegedly overpriced P2.3-billion Makati City Hall Building II.

Former Makati Vice Mayor Ernesto Mercado, now in the Witness Protection Program, has told the Senate subcommittee that the Binays were using dummies to hide their ill-gotten wealth.

Remulla said the Vice President would nevertheless continue doing his job concerning housing for the poor and overseas Filipino workers.

Binay earlier said that he would cooperate in the DOJ probe but it would depend on how the investigation would be conducted.

De Lima said the investigation would be “quiet,” as she would not recommend charges against Binay and would just refer the “findings,” along with the pieces of evidence to the Office of the Ombudsman so that questions about the Vice President’s immunity from suit would be avoided.

“This is a quiet investigation. We cannot call it a full-blown investigation that will encompass everything,” De Lima told reporters in an interview upon emerging from a meeting with whistle-blowers Mercado, Nicolas Enciso IV and Renato Bondal.

The NBI will focus on some but not all of the alleged anomalies involving Binay, his family and associates, the justice secretary said.

“I have heard the other allegations [of the whistle-blowers]. I will choose which allegation the NBI can help on. It’s hard for the NBI to investigate all allegations, it would take long and they will have a hard time. I will choose. I’ve been collating all of these, where the NBI can get involved. It will be a quiet investigation by the NBI,” she said.

Asked why the probe would be “quiet,” she said: “…(L)ook, we have not yet begun, there are already attacks. I don’t want the NBI to get distracted from its task. If we give regular updates [about the probe to the media and the public], it will just cause confusion.

“But every time we gather evidence in the course of the investigation, we will send it to the Ombudsman. Partial findings will be submitted to the Ombudsman. If we cannot validate, we won’t send it,” she added.

The NBI investigation of the allegations against Binay and the others would be different from the one conducted for the Priority Development Assistance Fund (PDAF) scam, De Lima said.

“It will be different from the PDAF [probe]. We won’t have a transmittal [to the Ombudsman] saying that this is being recommended for prosecution. We will leave it up to the judgment of Ombudsman,” she added.

De Lima said she would create a five-member team from the NBI to undertake the probe. The agency, she added, was already in the process of selecting the agents who would be assigned to the task. A different team will track down Gerry Limlingan, who Mercado claimed was Binay’s bagman when he was mayor.

Replying to a query about the time frame for the investigation, De Lima said: “It’s difficult to give a time frame. The first thing I’ll do is to identify which of the allegations can prosper [into a case] and which the NBI can help boost.”

Asked what made her decide to conduct the probe, she said: “It’s up to you to speculate because I might answer questions that should not be answered yet.”

On whether the subjects of the probe would include the allegedly overpriced Makati City Hall parking building and the so-called Hacienda Binay in Batangas, she said, “I can’t tell yet but there will be a lot.”

De Lima said the reason the investigation would not specify criminal charges was to avoid discussion about the extents and limits of the Vice President’s immunity.

“I want to avoid talk about immunity for now. They (Binay camp) are saying, ‘We can’t be investigated because we have immunity from suit. The Vice President is impeachable (can only be removed by impeachment).’ But really, the only one immune [from criminal suit] is the President. Suits can be civil, criminal and administrative. It does not mean that if you’re impeachable, you are exempted from criminal prosecution.”

De Lima admitted that issue on the immunity of the Vice President was something new to Filipinos.

“Let’s say that an anomaly was established, can he be charged? That’s the open question. Many are saying they (constitutional officers) should be first impeached before they can be charged. That’s the safest and strictest way of doing it. It means no one is exempt from criminal prosecution. What’s being debated now is, can it be done before he (Binay) is impeached or not? That’s why we will leave it up to the Ombudsman to give its view on the issue,” she said.

No immunity from probe

The justice secretary reiterated her stand that the Vice President, if immune from suit, can’t be immune from investigation.

“One thing is clear: It can’t be that we can’t investigate because he’s immune from suit. There’s no such thing as immunity from investigation. And one more important thing, it’s not only Vice President Binay who will be covered by the probe but his family and alleged dummies. They are not immune from suit.”

Asked if, theoretically, she believed that the President could also be investigated, she replied, “Only he (President) has immunity from suit. I cannot surrender my belief in that. But I’m not saying absolutely that I’m certain. What will be argued about is when may the charges be filed. I don’t want to insist on it. What the country deserves is for the truth to be determined. Are Mercado and company lying?”

De Lima said she found a case decided in 2003 by the Supreme Court in which the chair and members of the Commission on Elections were cited for contempt and fined P5,000 to P20,000 for violating directives of the high tribunal and delaying the ultimate resolution of the disputed party-list election results.

“The Supreme Court made a statement that you’re wrong if you think that just because you are impeachable officials [being Comelec commissioners], you are already immune from suit. We can cite you for contempt and contempt has a penal aspect,” she said.

Asked if she had informed the President about her decision to undertake the probe, she replied, “Let me just answer that by saying I made the decision to investigate. I’ll only stop when stopped by the Ombudsman and the President.”

JV Bautista, the interim secretary general of Binay’s United Nationalist Alliance party, said De Lima had no jurisdiction to investigate Binay, reminding her that she belongs to the executive branch and that Binay was “her superior.”

“She is possessed with (neither) power nor authority to order an investigation against her superior, in the same manner she cannot order the investigation of the President,” Bautista said in a statement.

He said the DOJ had no jurisdiction to investigate any impeachable official as this exclusively belonged to the Ombudsman. Bautista said the justice secretary should read her Administrative Code and the Ombudsman law.

“Besides, why is she initiating the investigation motu proprio? There is no instruction or order from the President, nor is there any request from the Ombudsman,” Bautista said.

“De Lima is certainly courting a lawsuit for her abusive and unlawful acts. Perhaps, another disbarment case will knock some sense into her head,” he said.