Tuesday’s battle in which NPA commander Mark Bryle Garduque alias Bryan and another identified only as Daniel were killed, was the offshoot of a continuing military operation in Barangay (village) Kinangan, a statement from Lieutenant Colonel Patricio Ruben Amata, commander of the Army’s 73rd Infantry Battalion, said. 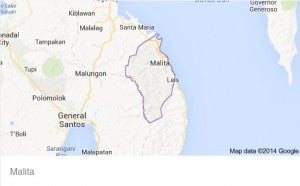 Amata said the bodies of the two NPA commanders were recovered along with five M-16 rifles, three AK-47 rifles, an M-653 rifle, an M-14 rifle and 14 backpacks.

Magpatoc herself was captured in July 2013 in Digos City.

Dubria, who has jurisdiction over Davao Occidental, identified the captured rebels as Evelyn Magpatoc of Binatagan, Butuan City, and Ritchie Abrenica of Barangay Kinabalan in Malungon, Sarangani Province.

Amata said no casualties were reported on the government side.

In Magpet, North Cotabato, a couple who joined the NPA last year yielded to the military on Monday.

Colonel Nilo Vinluan, commander of the Army’s 57th Infantry Battalion in North Cotabato, said Marco Engay Via, 39, and his wife, Gina Calimpitan Via, 34, voluntarily surrendered due to health reasons and “hunger in the hinterlands.”

“Both of them had been sick for quite some time now and could no longer endure the hardships,” Vinluan said.

He said the couple were among rebels who participated in an attack on the police station of President Roxas last May. Reports from Eldie Aguirre, Orlando Dinoy, Williamor Magbanua and Edwin Fernandez, Inquirer Mindanao