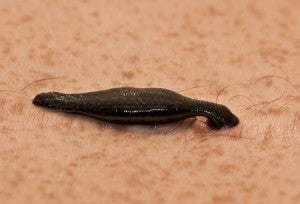 After returning home to Edinburgh, 24-year-old Daniela Liverani was horrified to discover a 7.5-centimeter leech had been living in her nose for about a month.

Liverani believes she picked up the creature in Vietnam or Cambodia, the BBC reported.

She initially thought her persistent nosebleeds were caused by a burst blood vessel from a motorbike crash during her trip. Several times, she even saw the creature sticking out of her right nostril but assumed it was just a blood clot.

It was only on October 9, while she was in the shower, that she realized something was wriggling in her nose.

She immediately went to the accident and emergency department at Edinburgh’s Royal Infirmary, where doctors removed the parasite with forceps and tweezers.

“[It] was about as long as my forefinger but as fat as my thumb,” said Liverani as quoted in the Daily Mirror.

“I asked the doctor what would’ve happened if I hadn’t gone to hospital and she said it would probably have worked its way into my brain.”