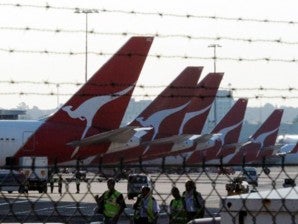 SYDNEY–A torrent of water which gushed into the cabin of a Qantas superjumbo, raining down on some passengers’ heads, could have been caused by cleaning mops loosening a pipe coupling, an inquiry said Wednesday.

The incident, dubbed “Lakes on a Plane” by Australian media, occurred in July on an Airbus A380 carrying 401 people which had just taken off from Los Angeles for a flight to Melbourne.

Australia’s Transport Safety Bureau said the leak of some 700 litters had come from a water pipe coupling in the galley that had come undone.

“There was evidence that the rope-style mops used by cleaners may have contributed to the coupling coming undone,” it said.

“Fleet-wide inspection of the fittings found strands of cleaning mops tangled in the brackets, with evidence of couplings rotated in opposing directions.”

The Qantas crew were advised that the water would drain towards the bilges and away from the aircraft’s main electronic systems, and there were no safety concerns.

But they decided to return to Los Angeles because continuing the 14-hour flight to Melbourne with the water supply for toilets and basins cut off would be untenable.

“As the aircraft commenced descent, a cabin crew member advised the flight crew that the leaked water was moving forwards in the aircraft,” the ATSB report into the incident said.

“The flight crew then conducted a slow speed descent to keep the water stabilized and prevent it flowing forwards. The aircraft landed without further incident.”

As a result of the incident, Qantas carried out inspections on all of its A380s, and temporary preventative action was taken on similar galley installations. The aircraft are now cleaned with sponge rather than cotton-rope mops.

Aircraft manufacturer Airbus is also working on an interim and a permanent solution, the ATSB said.