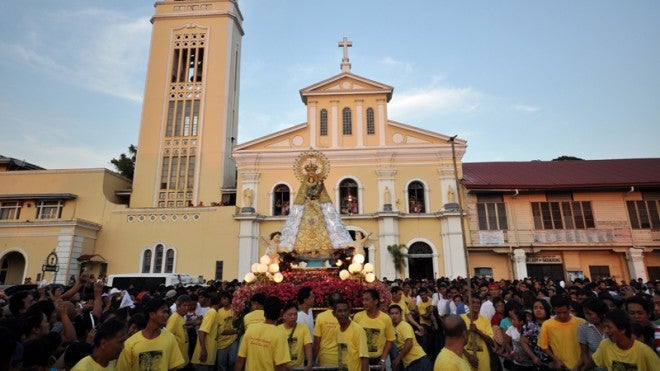 FROM SHRINE TO BASILICAMINORE A procession during the Manaoag town fiesta in 2012 leaves the Shrine of Our Lady of the Rosary of Manaoag in Pangasinan province. WILLIE LOMIBAO/INQUIRER NORTHERN LUZON 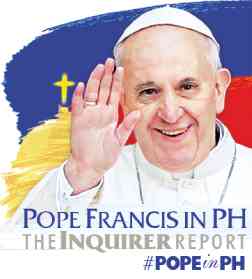 MANILA, Philippines–A few months before his visit to the Philippines, Pope Francis has given the title “minor basilica” to the Shrine of Our Lady of the Rosary of Manaoag in Pangasinan province.

“Pope Francis has granted the title Minor Basilica to the Marian Shrine of Our Lady of Manaoag. The Archdiocese of Lingayen-Dagupan is immensely blessed,” Lingayen-Dagupan Archbishop Socrates Villegas, president of the Catholic Bishops’ Conference of the Philippines (CBCP), said in his Twitter account.

Pope Francis will visit the Philippines from Jan. 15 to 19.

The Manaoag shrine houses the image of Our Lady of the Rosary of Manaoag, which most Catholics believe is miraculous.

According to a CBCP post, the shrine is also a parish church of the Archdiocese of Lingayen-Dagupan. The shrine is an affiliate of the Papal Basilica of Santa Maria Maggiore in Rome.

Villegas said this means the spiritual benefits that one gains by visiting the papal basilicas will also be received by those visiting the Shrine of Manaoag.

“The devotion to Our Lady of Manaoag has helped deepen the piety of many Catholics not only in Pangasinan but throughout the country,” the CBCP post said.

For Catholics, according to www.stspeterandpaulbasilica.com, a basilica is a church that has been accorded special privileges by the Pope.

“Minor basilicas are significant churches in Rome and elsewhere in the world that meet certain criteria and are given special ecclesiastical privileges,” a post on the website says, citing the 1989 Vatican document Domus Ecclesiae.

“Minor basilicas are traditionally named because of their antiquity, dignity, historical value, architectural and artistic worth, and/or significance as centers of worship,” it says. “A basilica must ‘stand out as a center of active and pastoral liturgy.’”

The official website of Manila Cathedral, which has also been named a minor basilica, says the traditional manner by which a church is elevated to the rank of a minor basilica is through a petition by the bishop in whose diocese the church is found.

“The bishop, with the concurrence of the episcopal conference of the given country, makes a petition to the Pope through the Sacred Congregation of Divine Worship that the central church of his diocese be elevated to the status and dignity of a minor basilica,” according to an article posted on the website.

“A bishop may undertake such a petition through a widespread consensus in the diocese and among other bishops that the specific church plays a prominent and significant role in the religious life of the country and that the splendor of the liturgical ceremonies performed therein is extraordinary.”

Lady of Manaoag: Blue to purple

At 76, Manaoag rosary vendor lives her own miracle

Churches to visit north of Manila