Beside church ruins, a new place of worship in Bohol town | Inquirer News

Beside church ruins, a new place of worship in Bohol town 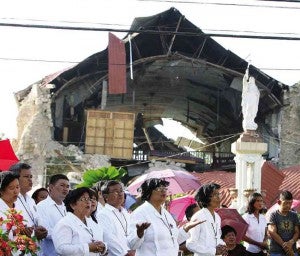 LOBOC, Bohol—Like many of the parishioners here, 67-year-old Amy Ladaga felt her heart tear to pieces when she saw the devastation on their church caused by the 7.2-magnitude earthquake last year.

“We were all sad when we saw the extent of the damage. If you were the one looking at it, you would also feel the devastation,” she told the Inquirer.

Ladaga was one of over 1,000 parishioners who attended Mass at the alternative church, as well as its blessing, which was built 5 meters from the old St. Peter Parish Church. Many were teary-eyed when the famous Loboc Children’s Choir sang “Light of a Million Mornings” and “Rise Up Again.”

The church in Loboc town, built in 1602, was the second oldest in Bohol province. It was heavily damaged when the earthquake shook the province on Oct. 15, 2013.

Its walls on one side remain standing but the convent-turned-museum, sacristy and facade went down in crumbles.

For almost a year, parishioners have been attending Mass under tents set up beside the ruins. They would bring their own chairs, sometimes umbrellas when it rained.

Church repair would have cost at least P200 million, an amount church officials didn’t have, so they decided to build a substitute house of worship. Through donations, they were able to raise at least P15 million, mostly from Loboc residents now based in other countries.

With the funds, the officials led by parish priest Fr. Andres Ayco bought a 2,000-square-meter lot for about P5 million and built the 1,000-seat church made of concrete with steel beams and iron sheets. It would be where the 1800s-era pipe organ would be placed instead of the old one.

The facade has a stained-glass image of its patron, St. Peter the Apostle. On the altar are similar images of two Filipino saints— San Pedro Calungsod and San Lorenzo Ruiz—and a cross with the crucified Jesus Christ.

On Sunday, just three days before the first anniversary of the strongest earthquake to hit Bohol in recent years, the alternate church was blessed in rites led by Bishop Leonardo Medroso of the Diocese of Tagbilaran. Medroso was joined in the ribbon cutting by Father Ayco, Bohol Gov. Edgar Chatto, Loboc Mayor Helen Alaba and Bohol Rep. Arthur Yap.

In his homily, Medroso recognized how the parishioners banded together to put up an new church. “This is a place of worship where we are once again united to experience God. He united us [after the earthquake],” he said.

For Ladaga, things will be different now with the construction of the alternative church. Though it could never replace the old church, she said, it would continue to remind the people that their faith made even stronger after the quake.

“The old church may not be brought back but the attendance of churchgoers has doubled,” she added.