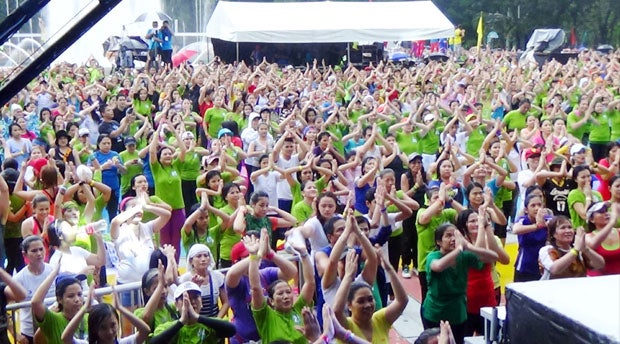 MANILA, Philippines – Almost but not quite.

Quezon City government’s attempt to set a world record for the largest Zumba class ended in failure due to non-compliance of technical guidelines set by the Guinness World Records Sunday.

Particularly, the problem that plagued the event was the failure to accurately tag all the participants when rain during a thunderstorm lashed Quezon City, forcing organizers to cancel the outdoor party.

Organizers said the event would be reset for a later date.

The announcement dismayed many participants, but they went on partying despite the rain.

Unofficially more than 10,000 people braved the rain to join the world record attempt at the Quezon Memorial Circle, according to the event organizers.

The Z Party began at around 4 p.m. and was hosted by dancer-host Regine Tolentino. Meanwhile, rapper Andrew E. also performed to the delight of the participants.

The largest Zumba class attempt was part of the celebration of the Quezon City’s diamond jubilee.

The Quezon City government initially targeted 9,000 people to participate in the event to break the world record established by India.

In an earlier statement, Mayor Herbert Bautista said that the activity is aimed to get “everyone in Quezon City moving and grooving as one, as they aim to make new history for our beloved city.”

Roxas does the Zumba for a healthy police force