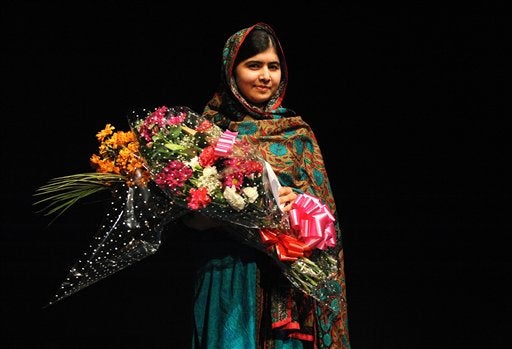 Malala Yousafzai poses with a bouquet after speaking during a media conference at the Library of Birmingham, in Birmingham, England, Friday, Oct. 10, 2014, after she was named as winner of The Nobel Peace Prize. AP

BIRMINGHAM, England — Malala Yousafzai celebrated her Nobel Peace Prize where she always wished to be: in school.

The Pakistani girl once shot by the Taliban for daring to want an education just like the boys celebrated being the joint winner of the peace prize Friday with her classmates at Edgbaston High School for girls in Birmingham, the city in central England that she now calls home.

The teenager had traveled to Birmingham for medical treatment after being targeted by the Taliban for her relentless objections to the group’s regressive interpretation of Islam that limits girls’ access to education. She was shot while returning home from school in Pakistan’s scenic Swat Valley two years ago, almost to the day.

“This award is for all those children who are voiceless, whose voices need to be heard. I speak for them and I stand up with them. And I join them in their campaign,” she said at a news conference Friday at Birmingham Library. “They have rights. They have the right to receive quality education, they have right not to suffer from child labor, not to suffer from child trafficking. They have the right to live a happy life.” 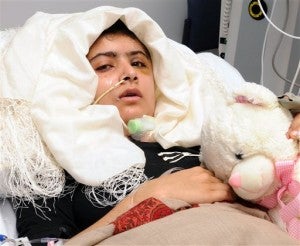 This undated file photo provided by the University Hospital Birmingham NHS Foundation Trust on Friday, Oct. 19, 2012, 15-year old Pakistani shooting victim Malala Yousafzai recovers in Queen Elizabeth Hospital in Birmingham, England, after being shot in the head by the Taliban in Pakistan for advocating education for girls. AP

She said it was an honor for her to share the prize with Kailash Satyarthi of India, 60, who has spent a lifetime working against child slavery and exploitation. She also invited the prime ministers of both India and Pakistan to attend the Nobel awards ceremony.

Malala’s case won worldwide recognition, and the teen, now 17, became a symbol for the struggle for women’s rights in Pakistan. In an indication of her reach, she spoke before the United Nations and made the shortlist for Time magazine’s “Person of the Year” for 2012.

But the journey was simply improbable.

On Oct. 9, 2012, Malala climbed into the back of a small pick-up truck used to transport Swat Valley children home from school. They laughed and talked as the truck rumbled over roads lined with pot holes.

As they approached a narrow bridge over a garbage-strewn stream, a masked man with a gun suddenly stopped the truck. Another man with a pistol jumped into the back.

“Who is Malala?” he shouted.

The girls did not answer but heads automatically swiveled toward her. The man raised his pistol. One bullet hit Malala on the top of her head. Two other students were also hit, less seriously.

Malala was transferred to a military hospital near Islamabad, the Pakistani capital, as her head swelled dangerously. Her father, Ziauddin, was certain that his daughter would not survive the night. He sent a message to his brother-in-law in Swat to prepare a coffin.

Pakistani doctors removed a bullet that entered her head and traveled toward her spine before she was flown to Britain for more specialized brain trauma care. She woke up a week later at Queen Elizabeth Hospital in Birmingham, England.

She says she regained consciousness with one thought: “Thank God I’m not dead.”

Malala gradually regained her sight and her voice. She was reunited with her parents. Soon there were pictures, stuffed animals at her side. She sent messages to well-wishers.

Three months later she walked out of the hospital, smiling shyly as she cautiously strode down the corridor.

“She is quite well and happy on returning home — as we all are,” her father told The Associated Press at the time.

Pakistan made Malala’s father its education attache in Birmingham for at least three years, giving the family stability and Malala a safe place to go to school.

She went back to school as soon as she could, and confessed that math was her least favorite subject. She kept campaigning for the rights of children to go to school — meeting President Barack Obama, attending rights conferences, becoming the keynote speaker at corporate events in London. She began rubbing elbows with people who had the power and the money to help her realize her dreams.

All along, she delighted many by simply being young, determined and most of all, herself.

At a Vodafone conference celebrating women, she confided that she didn’t have a mobile phone. The crowd gasped, but chuckled at the notion of a teenager who admitted she had no need for a phone.

She co-authored a memoir, “I am Malala,” which revealed to the world that she was, in fact, also a regular teenager. There’s a part of her that loves the TV show “Ugly Betty,” whose main character works at a fashion magazine. She likes pop star Justin Bieber, watches the television cooking show “Master Chef.”

And on Friday, the people who helped her on the journey — and those just touched by her story along the way — couldn’t help but be swept up by the magic of it all.

“Malala is an inspiration for the many women in Afghanistan and Pakistan who have been fighting for their rights and struggling against the misogynous policies of the Taliban and local warlords,” said David Cortright, co-author of “Afghan Women Speak” and a professor at the University of Notre Dame in Indiana.

Doctors in Birmingham offered congratulations, noting her focus and dedication. And the people of the city that threw its arms out to welcome her simply nodded their heads. No surprise at this news. She’s liked here, well known. Malala has embraced the city, proudly describing herself as a “Brummie” like other locals.

“Sure, puts a bit of pride into it,” said John Mullan, 78, a former aluminum worker and resident of Birmingham, said Friday after the Nobel Prize news. “She’s just young girl who stood up to them. Many other people wouldn’t have done that.”

Malala remains determined to return to Pakistan one day and enter politics. She will split the peace prize’s $1.1 million cash award with co-winner Satyarthi.