Senator Santiago’s way to solve a problem like Purisima 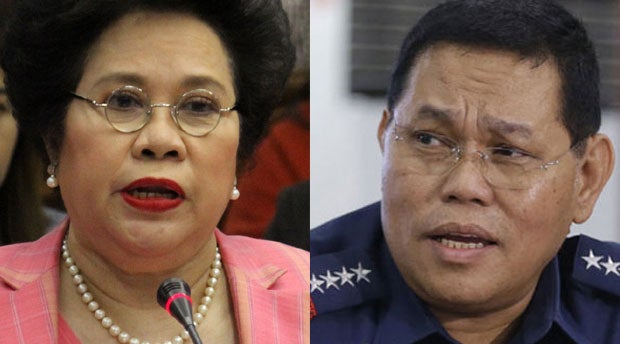 Never at a loss for words, Sen. Miriam Defensor-Santiago has a suggestion on what Malacañang should do with Philippine National Police Director General Alan Purisima—kick him upstairs so he would leave the PNP.

In a speech on Friday, the feisty senator asked President Benigno Aquino III to appoint Purisima to a post in the National Police Commission or the interior or defense department since he has refused to leave his position as PNP chief.

“That’s the best way, under the circumstances, to get rid of a suspicious character,” she told members of Philippine Association of Real Estate Boards Inc. in Alabang, Muntinlupa City.

Quoting from a book by a US law professor, Santiago said that when a person accepts another office incompatible to his first office, he vacates the first office and his title is terminated.

“In other words, President Aquino, please kick Purisima upstairs so that he will leave the PNP alone,” she said.

In Bali, Indonesia, where President Aquino is visiting, it was a different story for Purisima, who even got praises from the President.

He said the head of an agency should not be punished simply because an anomalous deal had occurred in the agency.

“If he is the head of an organization with 140,000 people, should he be responsible for each and every one of their actions?” Mr. Aquino asked.

“Perhaps if you knew of something wrong and tolerated it then there is an issue,” he said.

Commenting on Purisima’s house in Nueva Ecija province being opened to the scrutiny of the media, Mr. Aquino said: “This is the act of a man who has nothing to hide.”

Coalition of Filipino Consumers has filed charges of plunder against Purisima for his alleged “hidden mansion” in Nueva Ecija and his “White House,” or official residence in Camp Crame.

A complaint has also been filed against Purisima for his supposedly anomalous P100-million contract with a courier service firm for the delivery of firearms licenses.

Santiago enumerated alleged anomalies linked to Purisima, including his acceptance of an P11-million donation for the construction of the White House.

“That is called being caught red-handed. He does not deny it. He admitted that he had it fixed and then accepted money to recoup the expenses. That is a direct admission and confession of the crime of bribery. He’s too bold. If only he has no gun…,” Santiago said to chuckles from her audience.

Purisima also came under fire for engaging in a trucking business and poultry farm, and for using a bulletproof SUV not registered under his name.

“Suddenly, police and other government officials are interested in farming. Almost all of our public officials have big farms,” Santiago said.

Purisima also came in the spotlight over his property in Nueva Ecija that boasts of a two-story house, a swimming pool, a guesthouse and a gazebo.

“He’s in an agricultural area and yet his premises are a landscape. Pity the plants, he’s disciplining them,” she said.

Santiago found flimsy Purisima’s claim that his enemies were exaggerating his wealth.

“I have to be impressed with the defense made by Mr. Purisima. I have never before met someone who seems to have such a small mind inside such a big head,” she added.

Santiago said she observed Purisima’s demeanor when he testified at the Senate two weeks ago.

“Judging from his demeanor, I have to wonder whether a respondent works that hard to be a jerk or whether it just comes naturally,” Santiago said.

“People say he is the perfect jerk. I tell them he is not perfect but he is doing all right,” she added, to chuckles.

Reacting to Santiago’s remarks, PNP spokesperson Senior Supt. Wilben Mayor said: “All of us have our own opinion and are entitled to it since we are in a democracy.”

Mayor told reporters that the PNP would continue working as usual.

“We treat this criticism in a constructive way, as a challenge to improve the police service.” Mayor said. With a report from Julie M. Aurelio

Santiago on Purisima, oldest profession and being ‘heaven sent’