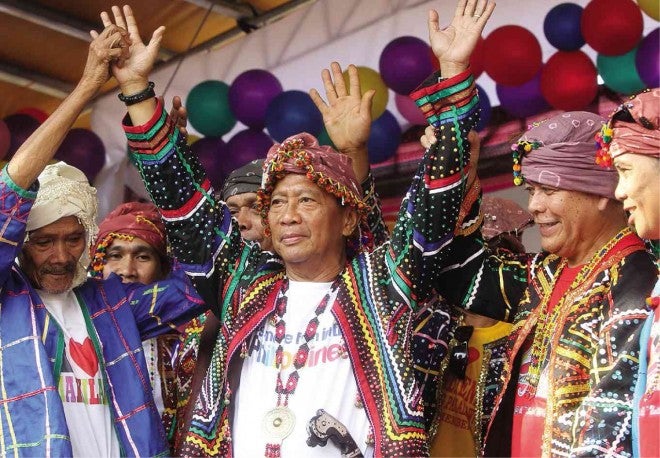 BINAY AND THE BAGÓBÔ Vice President Jejomar Binay is conferred the title Matan’am Datu (wise leader) by 29 chieftains of the Bagóbô-Tagabawà tribe in Makilala, Cotabato province, during Friday’s celebration of the town’s 60th founding anniversary. The title signifies that some 14,000 members of the Bagóbô-Tagabawà tribe in 29 barangays in Makilala now recognize Binay as their leader. PHOTO FROM THE OFFICE OF THE VICE PRESIDENT

That’s what the camp of Vice President Jejomar Binay had to say about the accusation of former Makati City Vice Mayor Ernesto Mercado that Binay amassed P4 billion in kickbacks from P15 billion worth of infrastructure projects that the city government awarded to his alleged favored contractor, Hilmarc’s Construction Corp., when he was the mayor.

Mercado told the Inquirer in an interview that Binay got 13 percent of the 28-percent kickback for every project awarded to Hillmarc’s.

He said he and 19 others shared 6 percent of the kickback.

“Other than bare allegations, Mr. Mercado has not produced any concrete proof or evidence that will stand [up] in court,” said Joey Salgado, spokesperson for Binay and head of the Vice President’s press office.

Salgado also observed that Mercado’s statements are inconsistent with his previous claims.

“Previously, he said it was the former city engineer, Nelson Morales, who was the main source of the alleged payoffs. He had claimed to be just a recipient and had no knowledge of the specific amounts allegedly due to other recipients. Now he talks with obvious authority on the breakdown of the supposed payoffs,” Salgado said, referring to Mercado’s testimony in a Senate blue ribbon subcommittee looking into the alleged overpricing of the P2.28-billion Makati City Hall Building II. The building was built by Hilmarc’s.

Documents obtained by the Inquirer showed the members of the city government’s bids and awards committee had not changed since Binay was the mayor, from 2007 to 2010, when his son, Jejomar Erwin “Junjun” Binay Jr., succeeded him.

Salgado explained that the composition of the panel was “always in compliance with the Local Government Code and its implementing rules, specifically Section 3.1 Rule 3.”

The documents showed that the committee abbreviated the bidding process by publishing the invitation to bid in just one Filipino tabloid, Balita, and only for one day, instead of the required 14 days in a newspaper of general circulation, and posted a public announcements involving projects only in the city library, instead of conspicuous places such as elevators and other areas frequented by people.

Apparently, public knowledge of projects was being limited to Hilmarc’s.

That’s not the case, Salgado said.

Binay not resigning from Aquino Cabinet