Binay not resigning from Aquino Cabinet 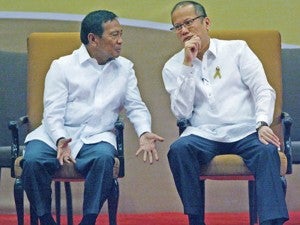 MANILA, Philippines–Vice President Jejomar Binay dismissed speculations on Friday that he would resign from the Cabinet despite the left and right allegations being hurled against him.

But Binay, who is also the concurrent head of the Housing Urban Development Coordinating Council, said he would leave it up to President Benigno Aquino III to decide on his fate as a member of his Cabinet.

(As far as my being a member of the Cabinet is concerned, the President will decide on that. But when I file my certificate of candidacy this October, I will be compelled (to resign).)

Unfazed by allegations that he received kickbacks and amassed unexplained wealth when he was still mayor of Makati City, Binay reiterated his desire to run for president in 2016.

(This has been my ambition ever since I was young. I have prepared and have had experiences working in the executive department. I was Mayor of Makati for 21 years.)

(As for the style of my leadership, you can see it in the way I led Makati.)

(That’s why it is my dream to do in the entire Philippines what I did in Makati.)

(It is always one of the options. There is nothing impossible in politics. There are just surprises. That is how politics operates.)

The Vice President also floated the possibility of having a coalition with the administration’s team.

(That is not far-off; it is possible for us to form a coalition.)

Binay had earlier claimed that Aquino’s Liberal Party was considering adopting him to be its bet in 2016 but this was immediately denied by some party leaders.