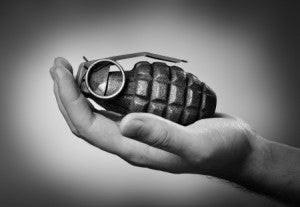 One of the injured was hurt seriously in the pre-dawn explosion outside a pub in Bukit Bintang, a popular area for shopping, dining and nightlife.

“We believe it was a hand grenade that was placed in front of a pub,” he said.

Police also found an unexploded grenade that was not of the type used by Malaysia’s military or police, he added.

He said a motive was not known, but another top police official told AFP a gangland feud was suspected.

An AFP reporter saw a heavily damaged minivan at the scene of the incident, which was roped off by a heavy police presence.

Such incidents are rare in Muslim-majority Malaysia.

But concern has been growing over the potential for militant violence, after authorities have said scores of Malaysians are believed to have gone to join the bloody civil war in Syria.

Security officials have expressed fear such recruits could become radicalized there by the Islamic State (IS) group, importing their extremist views after returning home or inspiring violent anti-Western attacks by supporters in Malaysia, where a moderate brand of Islam prevails.

Police said in August they had arrest 19 people in an amateurish plot to carry out a wave of IS-inspired bombings in Malaysia.