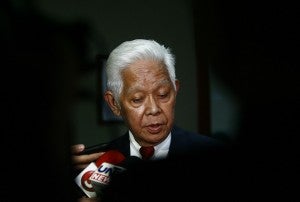 MANILA, Philippines–The mayor-elect of Aliaga, Nueva Ecija, has filed graft charges against Commission on Elections (Comelec) chair Sixto Brillantes Jr. in the Office of the Ombudsman for his alleged arbitrariness in blocking his proclamation as the duly elected town mayor.

He claimed Brillantes “took special interest” in the case because he was Vargas’ former election lawyer.

Vargas was ordered by a Cabanatuan City Regional Trial Court (RTC) to vacate her office on May 28 after it declared Ordanes as the real winner in the mayoral race.

“It is the policy of this government, in line with the principle that a public office is a public trust, to repress certain acts of public officers and private persons alike which constitute graft and corrupt practices or which may lead thereto,” the mayor said in his complaint.