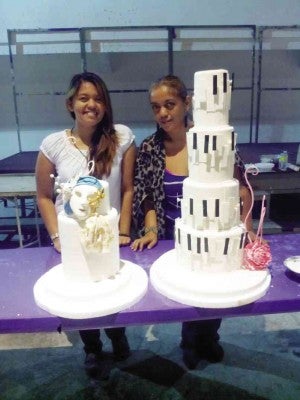 SHEILA Querubin and her daughter Alyanna share a passion for baking sweets as well as helping others. CONTRIBUTED PHOTO

MARINDUQUE, Philippines—Sheila Querubin never thought her sweet tooth would pull her through two of the lowest points so far in her lifetime—her brother and mother’s untimely demise.

Now seeing herself ready to move on, she wants to live by her brother’s mantra of paying it forward.

Sheila, 41, is an elder sister of Gerald Gene Querubin, Inquirer correspondent in Marinduque, who was also a state college instructor, environmentalist and community worker in the island province.

In 2004, Gerald, or “Toots” as he was fondly called by family and friends, cofounded the Marinduque Youth Volunteers Corps, an organization involved in raising calamity funds. He also organized educational activities, even rock concerts for a cause, for the out-of-school-youth.

Gerald died from a congenital heart condition in June 2013 at the age of 38. Hours before his funeral in Sta. Cruz town, also in Marinduque, his mother, Gracita, 63, died from a heart attack

“You know how it happened,” Sheila told the Inquirer. “I couldn’t sleep at night because I’d often check on my children if they’re all still breathing. I had to see a psychiatrist for months to recover.”

As a single parent of four, Sheila had no choice but to get back on her feet. After her losses, the family went home to Sta. Rosa City, Laguna province, and she was back to her first love—baking.

“Baking helped me cope with the depression,” she said in a phone interview on Tuesday. “I baked a lot, sometimes four to six cakes in a day, whenever I missed them (Gerald and Gracita). My children actually started complaining they could not find anything but cakes in our fridge.”

She said it was Gracita, a retired Home Economics teacher, who taught her baking when she was 7.

“It had always been Ina’s dream to open a bakeshop but I used to see baking just as a hobby,” she said.

Sheila worked in a children’s care facility in London from 2003 to 2008, while her children were left to her parents’ care in Marinduque.

While she was away, Gracita trained Sheila’s daughter, Alyanna Nicole, 18, who developed a passion for baking. Alyanna graduated this year with a certificate in Hotel and Restaurant Management.

Sheila uses 10 percent of the income to organize public baking seminars for poor mothers and teenagers in Sta. Rosa. For a fee of P100-P300, participants undergo basic cake and cupcake baking techniques and no-bake recipes seminars.

“Do you know how much culinary seminars cost? P5,000 is nothing! So at least for a small amount, attendees get an idea for a possible business of their own,” she said.

She also invites guest chefs, among them head chef Jimbo de Panadero, who is based in Papua New Guinea, and cookbook author RV Manabat. The collected fees cover the venue (an activity center in a shopping mall in Laguna), demo materials and the talent fees of resource speakers.

Alyanna, who specializes in customized and designer cakes, trains her own group of teens, one as young as 12. “To keep kids away from spending too much time and money on computer games and other stuff,” Sheila said.

“We’ve had a taste of the lavish lifestyle back when I was abroad and my children could afford changing their cell phones thrice a month,” she recalled.

“But after they (Gerald and Gracita) died, I realized how short life can be. I told myself, I needed to do something for others, no matter how small, like how Toots was able to.” Maricar Cinco