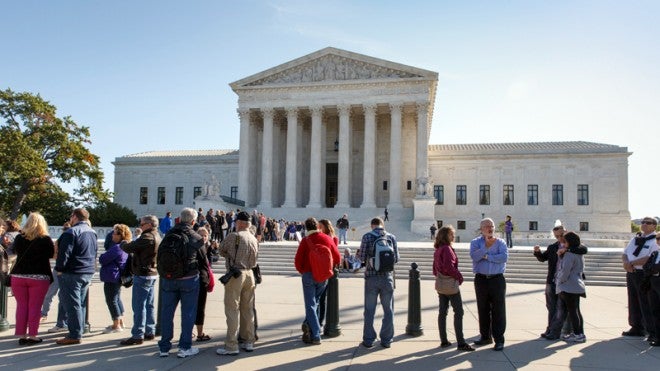 People wait to enter the Supreme Court in Washington, Monday, Oct. 6, 2014, as it begins its new term. The justices cleared the way Monday for an immediate expansion of same-sex marriage by unexpectedly and tersely turning away appeals from five states seeking to prohibit gay and lesbian unions. The court’s order effectively makes gay marriage legal now in 30 states. (AP Photo/J. Scott Applewhite)

WASHINGTON — The top U.S. court cleared the way Monday for an immediate expansion of same-sex marriage in the United States by unexpectedly and tersely turning away appeals from five states seeking to prohibit gay and lesbian unions. The Supreme Court’s order effectively makes gay marriage now legal in more than half of American states.

While the ruling stops short of resolving for now the question of same-sex marriage nationwide, it is a major victory for advocates of gay marriage. It continues a dramatic turnaround on the issue across the United States in recent years, with gay marriage generally winning approval in court cases, state legislatures and public opinion polls.

Lower courts have overturned one same-sex marriage ban after another following the high court’s landmark decision in June 2013 that partially struck down a Clinton-era federal law that defined marriage as between a man and a woman. Gay marriage proponents have since enjoyed a stunning string of legal victories, winning more than 20 court decisions around the U.S. Cases were filed in the 31 states that prohibit same-sex marriage.

Gay marriage has been a volatile social issue in America over the past decade, one that has veered from helping Republicans turn out their conservative base during George W. Bush’s re-election campaign in 2004 to one that now vexes the party. Public support has swung rapidly in favor of same-sex marriage in recent years. That’s a big shift since the Massachusetts Supreme Court declared the state’s marriage ban unconstitutional in 2003, prompting states around the U.S. to pass marriage bans.

The justices on Monday did not comment in rejecting appeals from Indiana, Oklahoma, Utah, Virginia and Wisconsin. No other state cases were pending with the high court.

The court’s order immediately ends delays on same-sex marriage in those four states. Couples in six other states — Colorado, Kansas, North Carolina, South Carolina, West Virginia and Wyoming — should be able to get married soon. Those states would be bound by the same appellate rulings that were put on hold pending the Supreme Court’s review.

The order effectively means gay marriage is legal now in 30 out of 50 states and the Washington capital district.

Experts and advocates on both sides of the issue believed the justices would step in and decide gay marriage cases this term. The justices have an obligation to settle an issue of such national importance, not abdicate that responsibility to lower court judges, the advocates said. Opting out of hearing the cases leaves those lower court rulings in place.

Evan Wolfson, president of Freedom to Marry, called on the high court to “finish the job.” Wolfson said the court’s “delay in affirming the freedom to marry nationwide prolongs the patchwork of state-to-state discrimination and the harms and indignity that the denial of marriage still inflicts on too many couples in too many places.”

Ed Whelan of the Ethics and Public Policy Center, an opponent of same-sex marriage, also chastised the court for its “irresponsible denial of review in the cases.” Whelan said it is hard to see how the court could eventually rule in favor of same-sex marriage bans after having allowed so many court decisions striking down those bans to remain in effect.

Two other appeals courts, in Cincinnati and San Francisco, could issue decisions any time in same-sex marriage cases. Judges in the Cincinnati-based 6th Circuit who are weighing pro-gay marriage rulings in Kentucky, Michigan, Ohio and Tennessee, appeared more likely to rule in favor of state bans than did the 9th Circuit judges in San Francisco, who are considering Idaho and Nevada restrictions on marriage.

James Esseks of the American Civil Liberties Union said he believes the court will quickly take up a case if an appeals court upholds state bans.

It takes just four of the nine justices to vote to hear a case, but it takes a majority of at least five for an eventual ruling. Monday’s opaque order did not indicate how the justices voted on whether to hear the appeals.