Probe into relocation of Badjaos sought 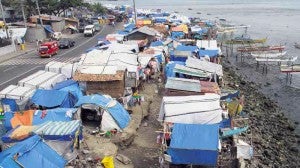 MANILA, Philippines – Militant lawmakers have sought an investigation into the relocation of Badjaos to the mountains of Zamboanga City after the failed Moro National Liberation Front (MNLF) siege last year.

Hundreds of Badjao families were relocated to Tulungatong, Mampang and other villages far from the sea, Ilagan and De Jesus said. Clearly, the move displaced the indigenous ethnic group, they noted.

The Badjaos in Zamboanga City live and earn a living in the coastal areas of Mariki and Rio Hondo, among the most devastated areas in the rebel standoff in September 2013.

Ilagan said Badjao families were prohibited from returning to their communities after the local government declared these “no-build, no-return zones.”

De Jesus, meanwhile, argued that relocating Badjaos to the mountains from the sea “is the same as relocating the mountain people to the sea. They cannot survive too.”

De Jesus deplored that the Badjaos were not consulted about their relocation.

The lawmaker cited the United Nations Guiding Principles in internal displacement, which states that “government is mandated to protect the displaced indigenous peoples, minorities, peasants and other groups with a special dependency on and attachment to their lands.”

“The international humanitarian laws also recognize the right of the Badjaos as internally displaced persons, to return to their homes as soon as the reason for their displacement ceases to exist,” De Jesus said.

“They want to go back to their homes, and they don’t to live in the city,” she added.

The Moro insurgents, led by rebel leader Nur Misuari, signed a peace deal with the government in 1996, but the guerrillas did not lay down their arms and later accused Manila of reneging on a promise to develop long-neglected Muslim regions in Mindanao. The government said Misuari kept on stalling and making new demands.

Tribe relying on sea for work being relocated to bunkhouses