Tribe relying on sea for work being relocated to bunkhouses 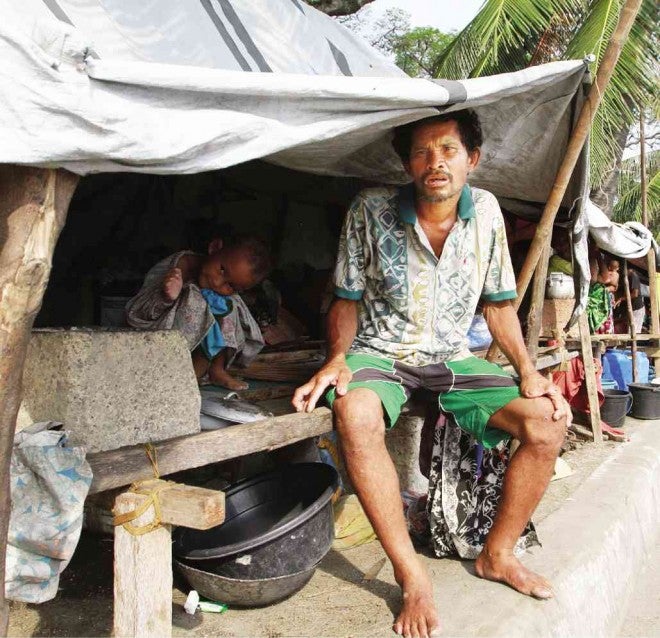 Badjao evacuees, like Sani Hadjani, 48, live on the street in Cawa-cawa village, Zamboanga City, which is near to where they make a living—the sea. EDWIN BACASMAS

Leonida Bayan, assistant social welfare officer, could not offer an explanation except to say the city government was “determined to clear the islands and the shorelines of Cawa-cawa before Monday.”

Bayan said the target of a demolition on Saturday were structures put up by Badjao families that were originally from Rio Hondo and Mariki villages.

“Those without tags and cards will be forced to demolish [their homes],” she said, referring to the Badjaos who were forced to flee to the village following the terror attack on the city by followers of Nur Misuari and the government siege that followed it.

On Saturday, the Badjaos (sea gypsies) started removing the structures they had put up or folding up their tents amid a drizzle and under the watchful eyes of soldiers and policemen.

Col. Andrelino Colina, commander of Task Force Zamboanga, said they had warned the Badjaos that those who will strongly resist “will be dealt with accordingly.”

Elmer Apolinario, assistant city administrator, said the city government did not want confrontation either, which was why the Badjaos were ordered to peacefully tear down their houses, pack up and leave.

But Badjao leaders said they obliged, even if it was painful for them to leave the area that they already consider their second home.

They pointed to the presence of specialized security forces, such as the Marines and the police’s Special Weapons and Tactics team trained for antiterrorism work, as the main reason they had to oblige.

Badjao leaders Asikal Maasiral and Panglima Tadjirun Sabturani said they did not want their people to get hurt, which was the reason why they readily agreed to board the trucks sent to pick them up.

But they said they were still puzzled as to why the demolition was being carried out when city hall officials had earlier assured them that there would be no forced relocation like what happened to them in September.

The Badjao leaders recounted that when Misuari’s followers entered the city, Mariki and Rio Hondo were not in the line of fire.

But even then, they were forcibly relocated to Cawa-cawa.

Maasiral said they had demanded an explanation from Zamboanga City Mayor Ma. Isabelle Climaco-Salazar but they were ignored.

Satulnina Aril, a Badjao mother, is among those opposed to the relocation. She said she wanted to return to her old place.

As of Saturday, 30 families heeded the forced relocation order, according to Jarnari Hadjirul, a 65-year-old Badjao team leader.

Bayan said the remaining Badjao families, numbering over a hundred, had until Monday to leave Cawa-cawa.

She justified the second forced relocation by saying Mampang and Arena Blanco villages were areas better for the Badjaos.

“They have water and electricity in the schools there, and food will be provided until the bunkhouses are erected in Mampang and Arena Blanco,” she said.

Maasiral said they did not want to live in Mampang and Arena Blanco because these are far from their source of living—the sea. The Badjaos are fishermen. Julie Alipala, Inquirer Mindanao