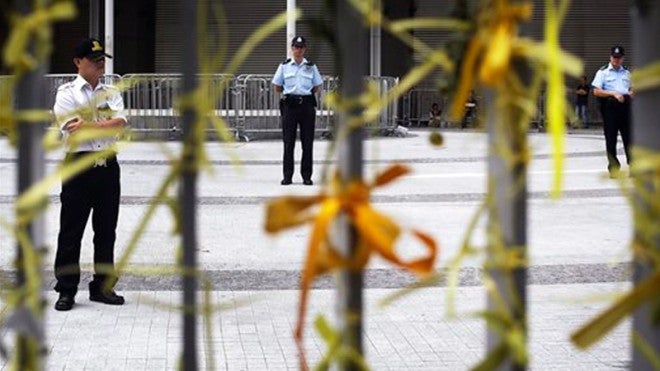 Police officers stand guard at the legislative council compound behind a fence decorated with yellow ribbons, which have become a symbol for people to show their solidarity with protesters occupying parts of Hong Kong to demand genuine democratic reform, Saturday, Oct. 4, 2014 in Hong Kong. But as part of a backlash against the protesters, a new opposition “blue ribbon” group has emerged. AP PHOTO/WONG MAYE-E

HONG KONG—Prodemocracy groups in Hong Kong have made yellow ribbons a symbol of their movement—but as part of a backlash against the protesters, a new opposition “blue ribbon” group has emerged.

Wearing the ribbon pinned to their chests and organizing counter-rallies on Facebook, members say the new group has been founded to support Hong Kong’s police, with the color a nod to the blue of officers’ uniform shirts.

The city’s police force has been heavily criticized over its use of tear gas last Sunday and for its failure to contain violent attacks on prodemocracy protesters by aggressive counterdemonstrators in two busy shopping districts on Friday.

With accusations from demonstrators and lawmakers that triad gangs were used in the attacks, the police and the government have been forced to deny that they had worked with criminals.

Blue ribbon wearers interviewed by Agence France-Presse (AFP) insisted they were simply ordinary members of the public who wanted to show support for the usually trusted police force.

“Some officers have told me they haven’t had rest for 24 hours. If this continues, Hong Kong will not be able to handle it,” said Joe Sin, one of the organizers of a blue-ribbon wearing group that calls itself the “Alliance in Support of Our Police.”

“We do not wish to have the People’s Liberation Army come into the city to help, we just hope that Hong Kong citizens will support the police,” he added.

But protesters are becoming increasingly wary of anyone wearing the symbol after Friday’s violence, which led prodemocracy leaders to pull out of proposed talks with the government and sparked fears over a divided society.

Crowds of baying protesters surrounded police, accusing them of cooperating with gangsters, according to AFP reporters at the scene.

“I think there will be more anti-Occupy people stirring up trouble because the movement is going to continue after the breakdown of talks,” Tsai Wing-li, 23, told AFP, referencing the Occupy Central movement that launched the protests on Sept. 26.

Blue ribbon supporters sought to distance themselves from the violence when they spoke to AFP.

He was attending a gathering organized on Facebook by progovernment group Caring Hong Kong Power and held in the commercial hub of Mong Kok, which saw the worst of Friday’s attacks.

Workers at the event cut up blue ribbons and handed them out to the crowds, encouraging the public to speak over microphones.

Around 70 blue ribbon supporters also gathered outside police headquarters in the downtown neighborhood of Wanchai on Saturday.