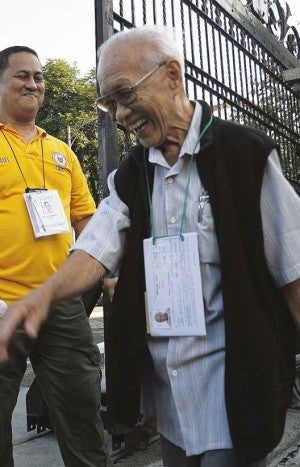 SEASONED CANDIDATE A laughing, confident Bienvenido Hilario steps through the UST gate for his third try at the bar. Even the guard appears happy for him. RAFFY LERMA

MANILA, Philippines–Among the more than 6,000 examinees who trooped Sunday to the University of Sto. Tomas (UST) in Manila for the first day of the 2014 bar exams was 88-year-old Bulacan native Bienvenido Hilario.

Hilario said it was his third try at the test.

“I’m the oldest candidate, but I always failed [the bar] because I got low marks in some [exam] subjects. I am not so lucky that’s why I keep returning. I wish I pass before I die,” a laughing Hilario told reporters who interviewed him as he was about to enter the UST campus. Examinees are also called candidates.

He said he reviewed by himself which explained why he did not look like he was under any pressure.

A graduate of the Philippine Law School (PLS) in Pasay City, Hilario described himself as a “pensioner,” who used to work in the banking sector and at the old Manila International Airport.

The bar exams will be held on all four Sundays of October. On Sunday, the exam topics were Political Law and Public International Law from 8 a.m. to noon, and Labor Law and Social Legislation from 2 p.m. to 6 p.m.

According to the Supreme Court public information office (PIO), this year’s exams are composed of essay questions (80 percent) and multiple choice (20 percent).

Family members, friends, classmates, law school fraternity brothers and law firm colleagues accompanied the bar examinees to the UST on España Street. Some prayed in groups while others applauded and yelled out words of support to the examinees.

The National Union of People’s Lawyers (NUPL), in a message posted on its Facebook page, called on the examinees to “raise the bar and give it your best shot” so that they could join the ranks of the defenders of human rights and public causes.

“So many poor and oppressed, the voiceless and the underdog are eagerly waiting for you with open warm arms to be with and to stand by them. The most ethical thing you could do as a future lawyer is to use your legal knowledge, education and training to tilt the proper balance in favor of truth and justice for the many and not the few,” NUPL secretary general Edre Olalia said.

Law professor and bar reviewer Samson Alcantara of the Social Justice Society, third placer in the 1954 bar exams, encouraged the examinees to be confident and to keep a clear mind.

“This is the fight we have been training for. And one we should not and cannot lose. Because actually we have no opponent except ourselves. We may lose because of our lack of confidence or nervousness. But I am very sure that after the final bell, the verdict will be ‘all passed.’ So carry on. God bless,” he said on his Facebook account.

Volunteers from law schools and fraternities showed support for examinees by seeing them off, offering them lunch and helping them relax between exams.

“The aim of bar ops is to boost morale, so that our examinees see the support from their school,” said Hazel Marfernandez, a law student from the University of St. La Salle (USLS) in Bacolod.

“We try to lighten their feelings, because the pressure gets to them,” she said.

Marfernandez was one of the less than a dozen USLS volunteers who made the trip to Manila for the school’s bar ops.

The group was at UST as early as 5 a.m. to accompany the school’s 30 bar examinees. At lunch, when examinees may leave the campus for a break, her group was seen meeting with the candidates outside UST, giving them lunch packs.

Neil Usaraga of Holy Name University in Tagbilaran, Bohol, said he joined the bar ops team as he wanted to get a feel of the atmosphere of the exams and to lend support to the school’s 26 examinees.

“Most of our examinees have been staying here in Manila to review. We are now here to show them that we are behind them,” he said.