MANILA, Philippines— Thousands have crossed the bar, to borrow a line from a poem, and made‎ it. Others who didn’t are joining thousands more in crossing it again in the hope of getting it done, this time.

For some 6,344 aspiring lawyers, years of caffeine ingestion, sleep deprivation, and rote memorization of laws have boiled down to the most important test of their lives as they take the 2014 bar exams starting this Sunday at the University of Santo Tomas.

This year’s bar exams is the 113th time that it has been facilitated. 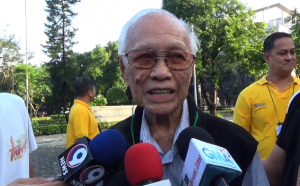 Another shot at redemption

For 88-year-old Bienvenido Hilario, this year marks the third time that he would take the exams. Hailing from Bulacan, Bulacan, he said that he wanted to pass the exams to use what he have learned from the Philippine Law School.  Like most bar examinees, he said that he prepared for the exams through self-review.

[I studied through self-review. That’s why I’m not pressured anymore. Maybe I’m not lucky that’s why I keep coming back.]

“Retakers” like Hilario outnumber the first time takers this year: 3,229 is to 3,115. The Supreme Court lifted the “five strike rule”, which states that one cannot take the bar for more than five times, last September.

For Nathaniel Jan Celiz from the University of Negros Occidental-Recoletos Law School in Bacolod City, he described the feeling of taking the bar exams as akin to meeting one’s first date for the first time.

Celiz added that the bar exams served as a time to remember and apply what they have learned from the past five years. Yet although how much they have prepared, he said that fear still crept in.

He added that without the support from his family and friends, he would not have graduated from law school and take the bar exams. 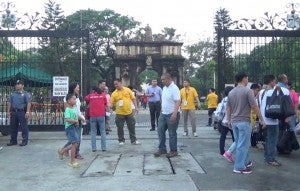 Classmates, friends, and family have also flocked UST to support the bar examinees. Organizations and schools provided food and reviewers enclosed in transparent bags. They also cheered the aspiring lawyers as they enter the exam venue.

The Milan family from Mountain Province went to Manila in order to support the fa barrister from their clan.  Zaiew Milan said that they supported the law education of her daughter Gwendolyn by selling pigs and bibingka. On Gwendolyn’s part, she balanced teaching for Korean students and attending law classes at night at the University of the Cordilleras to obtain her law degree.

The barristers were also seen skimming reviewers as they lined up for inspection, a final attempt to remember what they have learned.

For this year’s exams, transparent bags and backpacks of all forms and colors are in trend.

This has been in accordance to a new rule implemented by the high court asking barristers to place their belongings in transparent bags as a security measure. Also, bar codes in examination booklets have been placed as another security feature.

According to Manila Police Department Deputy Director Senior Superintendent Joel Coronel, the city government has implemented traffic rerouting and deployed about 250 police officers for the safety of examinees. He added that the first day of the bar exams has been generally peaceful.

Manila Mayor Joseph “Erap” Estrada has also inspected the security measures implemented by the police in the university premises. Also, Coronel said that they would strictly implement Executive Order 65 which bans selling of intoxicating beverages within 200 meters from UST.

The bar exams will be conducted four consecutive Sundays of October: October 5, 12, 19, and 26 and will cover eight subjects: Political and Public International Law, Labor and Social Legislation, Civil law, Taxation, Mercantile Law, Criminal Law, Remedial Law, and Legal and Judicial Ethics. Four hours have been allotted for each subject.