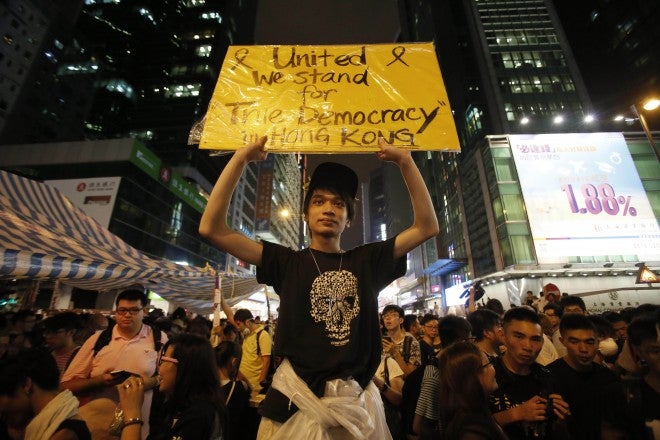 Embattled Chief Executive Leung Chun-ying said the government was determined to “take all necessary actions to restore social order” and allow residents to “return to their normal work and life”. In particular he pointed to the need to allow government staff to resume work by Monday morning.

He made a televised address as the biggest protest crowd yet — numbering tens of thousands — gathered for a peace rally late Saturday in the downtown Admiralty district near the government headquarters, chanting “Peace!” and singing democracy anthems.

The protesters have been out in force all week to demand the right to nominate who can run as Hong Kong’s next leader in 2017 elections.

The Communist government of China, which regained sovereignty over Hong Kong from Britain in 1997, insists that only pre-approved candidates will be able to stand and has repeatedly said the protests are doomed to fail.

By mid-morning Sunday the crowd had thinned out significantly but it remained to be seen whether protesters had heeded Leung’s call or merely headed home for some rest before taking to the streets again, which has been the pattern all week.

Sporadic clashes have broken out, mainly in the Kowloon district of Mongkok, with democracy activists claiming that agitators from the city’s triad mobs are being paid to attack peaceful demonstrators.

Violence flared anew in the early hours of Sunday in the densely packed district as riot police used batons and pepper spray to fight back demonstrators who accused officers of cooperating with gangsters.

‘A state beyond control’

Hours earlier Leung said he was determined to clear the streets near the government offices by Monday, after two public holidays cut short the working week last week.

“We have to ensure the safety of government premises and restore their operation,” said Leung, who was voted into office by 689 people on a pro-Beijing committee numbering just 1,200 two years ago.

“The most pressing task for the government is to reopen access to the CGO (Central Government Offices) on Monday so that some 3,000 CGO staff can return to their workplace and continue to provide services to the public.”

Leung added that the government “strongly condemns all violent acts” and issued an ominous warning if the protests are not ended.

“The situation may probably evolve into a state beyond control, and will have serious consequences to public safety and social order,” he said.

University administrators and teachers have made impassioned pleas for students to go home, fearing that any police attempts to clear the area later on Sunday could leave them injured.

On the streets of Admiralty, teachers were worried about what lay in wait.

“I think CY (Leung) will clear protest sites today. All I can tell my students is to be careful. I know that even if I asked my students to leave, they wouldn’t,” said a 57-year-old secondary school history teacher who gave his name as Mr Lee.

“But despite that, I’m going to continue to stay until real dialogue happens, hopefully with CY,” the 20-year-old added.

Student leaders had earlier agreed to discussions with Leung’s administration, but scrapped them over anger at police for failing to protect them during the violence in Mongkok.

Early Sunday, the students said they remained open to dialogue if certain conditions were met.

Hong Kong’s main student union, HKFS, said in a statement: “The government should investigate why the police were so lax in enforcement, accusations of helping criminals and to give an explanation to the public as soon as possible.

“As long as the government responds to the above, the students are willing to talk again,” it said.

While drawing many sympathizers to the streets, the protest campaign has also caused wide-scale disruption and taken a heavy toll on local businesses. Small rallies by crowds sporting blue ribbons have been held by people who say they support the police and the government.