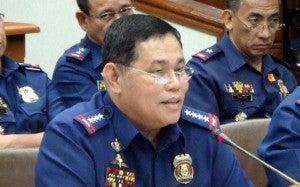 ZAMBOANGA CITY, Philippines — The 6,000 policemen in Western Mindanao on Saturday issued a manifesto of support and loyalty to PNP Director General Alan Purisima.

Chief Superintendent Edgar Basbas, regional police director for Western Mindanao, told the Philippine Daily Inquirer that “it was a concerted and unified agreement among the officers and men on the ground to produce a manifesto of support.”

The Western Mindanao Police Office was the first to rally behind Purisima following allegations of unexplained wealth.

Basbas said Purisima’s leadership helped in “enhancing the competence of the PNP personnel….reinvigorated the state of discipline to cleanse the ranks of misfits.”

Purisima was here for the groundbreaking ceremony of the P5-Million PMP multi-purpose function hall expected to be completed in April 2015. He, however, refused to be interviewed.

Basbas said Purisima was happy with their commitment. He thanked “the men and women, and told us to continue working and not to be affected by all the personal issues hurled against him (Purisima),” added Basbas.

Senator Antonio Trillanes, who was also in the city Saturday for his advocacy to suspend the K to 12 Education, told reporters that the Senate investigation on Purisima was “a fair move” to show that even President Aquino’s trusted officials were not spared from inquiries.

“I believe the calls for investigation is very much justified. A lifestyle check would be in order to resolve once and for all if he really amassed ill-gotten wealth,” Trillanes told reporters.