TACLOBAN CITY—One of the most heartrending images to come out of this city when it was ravaged by Supertyphoon “Yolanda” more than 10 months ago, unfolded around an iconic building here that manufactures one of the world’s most recognizable consumer products, Coca-Cola.

Dwarfed by three giant soda cans of Coca-Cola’s flagship products (Coke, Sprite and Royal Tru-Orange), a multitude of hungry and thirsty survivors waited in line a few hours after the storm passed, begging for water, while a desperate few looted the back of the manufacturing plant, carting away thousands and thousands of bottles of the prized carbonated drink. Some of the looters even had trucks and other vehicles in tow.

“It was a free-for-all. It was chaos all over,” said security guard Francisco Manzano, 39, who witnessed the mayhem firsthand.

The plant would ultimately open up all its inventory of water (those three mammoth soda cans were apparently stocked with water) and softdrinks to the survivors. By doing so, Coca-Cola became the first company and the first responder to address the survivors’ pressing need for water.

“They gave and gave until they had nothing more to give,” recalled Jerry Yaokasin, the vice mayor of this city who lives near the plant. Yaokasin barely survived the storm surges that killed more than 2,600 in this city alone.

Fearful that the city’s water, already in short supply, was contaminated and could spawn an outbreak of diseases, the survivors preferred drinking Coke for days and weeks after the disaster. The demand for the softdrink skyrocketed, with enterprising store owners setting up makeshift stalls along the highways, selling the product for as much as P150 for a 1.5-liter bottle.

The massive looting and physical destruction of the plant, located at an intersection of Fatima Village where the roads of Leyte and Samar meet, would ultimately cost the plant’s new owners, Coca-Cola Femsa Philippines, $15 million.

“There was no reason for them to stay. There was no point of rebuilding. But they made the hard decision to stay and rebuild. We will not forget this and we Taclobanons will forever be grateful,” said Yaokasin.

Instead of leaving, Femsa invested another $25 million to rebuild the Tacloban plant and transported machinery from its plant in La Union, one of the 23 it operates in the country, to beef up its operations in Leyte, which in its pre-Yolanda peak produced 25 million cases of Coke products each year.

Shortly before noon on Sept. 10, Juan Ramon Felix, the 52-year-old Mexican CEO of Femsa Philippines, pushed a button inside the newly reconstructed plant here and, in an instant, the drought in the East Visayan region’s favorite beverage ended. 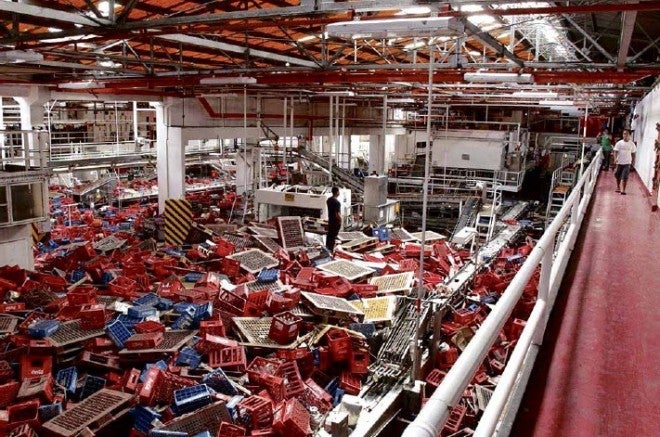 BEFORE AND AFTER In the aftermath of Supertyphoon “Yolanda,” the Coca-Cola plant in Tacloban is
in total disarray after having sustained $15 million worth of damage.

Though largely symbolic, Felix’s ministerial act allowed bottles and bottles of the company’s iconic softdrink to roll from production lines for the first time since the 61-year-old manufacturing plant was shuttered by Yolanda on Nov. 8, 2013.

But more important, Felix’s act and Coke’s decision to return here was a powerful gesture and vote of confidence in a city economically crippled and brought to its knees by the massive flight of long-established businesses in the wake of history’s most powerful storm.

Before Yolanda, there were 6,900 registered business establishments in Tacloban. After Yolanda, more than half of them had left, deciding to relocate their operations elsewhere. As of September, there were 3,874 businesses paying license permits in Tacloban.

The decision by Femsa to reopen its Coca-Cola plant in Tacloban reestablished its position as the city’s second-biggest taxpayer, second only to Coke’s former owner in the Philippines, San Miguel Corp.

“We have been witness to stories of courage and selflessness at the height of Supertyphoon Yolanda. It is with deep gratitude and great pride that we mark our return to Tacloban,” Felix told more than 200 cheering employees, wearing the company’s trademark red shirts.

In his inaugural speech, Felix also paid tribute to local Coke employees Pedro Navarro and Procopio Ballon, who both perished in the storm surges.

Femsa’s move was immediately hailed by city officials, still smarting from the capital flight and hemorrhaging of its tax base.

“We welcome your reentry into our business community. Only the international community and our corporate partners saved us from falling flat on our faces,” said Bernardita Valenzuela, the flamboyant and oft-quoted spokesperson of Tacloban City Mayor Alfred Romualdez.

Illustrating Coke’s enduring appeal through generations of Filipinos, the 85-year-old Valenzuela admitted to having been a Coke drinker since she was 15 years old. 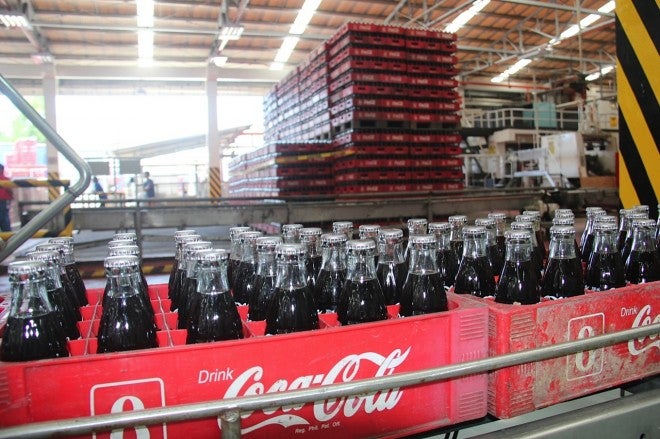 In September, less than a year after Yolanda, the first bottles roll off the reconstructed plant.

In 1927, San Miguel Corp. (then known as San Miguel Brewery) became the first international bottler of Coca-Cola. In 1981, San Miguel spun off its soft-drink businesses into a new company named Coca-Cola Bottlers Philippines Inc. CCBPI was a joint venture between San Miguel Corp. and The Coca-Cola Company (TCCC) of the United States.

In 2007, TCCC acquired San Miguel’s majority shares in CCBPI. In 2012, it sold its 51-percent stake in CCBPI to the Mexico-based Coca-Cola Femsa. Since 2013, CCBPI has been jointly owned by the TCCC and Coca-Cola Femsa.

“A lot of people are wondering about this formula. But Coke’s real formula is believing in our people,” said Juan Dominguez, Femsa Philippines corporate affairs director.

Femsa, whose Philippine venture is its first in Asia, also announced that it has donated more than $70,000 to Yolanda-rehab charities in Leyte and Samar through its Femsa Foundation. Two of the 100 Little Red Schools they plan to build in the country are in Tacloban and another one in Samar.

“Since Day 1, we never left Leyte, we have decided to place our stake here,” said Dominguez.

“Coke is part of our past, our culture and history as a people, we in Tacloban are happy that they are going to be part of our future,” Yaokasin said.

Coca-Cola shares the happiest way of saying thank you