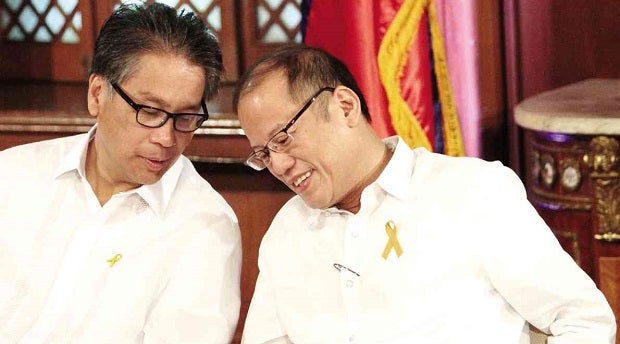 PRESIDENT Aquino leans over to listen to Interior Secretary Mar Roxas during a break from the oath-taking ceremonies of officials of the Union of Local Authorities of the Philippines in Malacañang. GRIG C. MONTEGRANDE

DAVAO CITY—Interior Secretary Mar Roxas appealed for support for the proposed Bangsamoro Basic Law (BBL) at a gathering of pro-Aquino reform groups here, saying it was the last chance to bring about lasting peace in Mindanao.

“For the first time after a long, long time, we are faced with an agreement that could bring about lasting peace in Mindanao,” Roxas said during Tuesday’s launch of Koalisyon ng Mamamayan Para sa Reporma, a group supporting reform programs under President Aquino.

Roxas, the presumptive presidential candidate of the ruling Liberal Party in 2016, said that while it was possible that the draft BBL might not be perfect, the people should not accept the alternative—status quo.

“What is unacceptable is to just accept the situation of conflict and violence,” he said.

He said the government would not force the law upon the people, as the people are the ultimate decision makers.

After Congress passes the BBL, Roxas said, the measure would be subjected to a plebiscite. The measure, he said, would not dismember the country and there would be no separate constitution for the new autonomous setup.

“I’m urging you all to participate,” he said. “Engage in the process to attain the light at the end of tunnel,” added Roxas.

Peace in Mindanao, he said, was most important for the youth. “You have the next 40 to 50 years ahead of you but the question is: What would those 40 to 50 years be like?” he said.

“Is it the continuation of the past when, every now and then, there [are gunfights]? Or will the next 50 years allow you to move forward so that instead of constantly worrying about your safety, as you are now, you will be worrying only about jobs, competition or selling your products and services?” he added.

He said that under a regime of peace, Mindanao’s potential in trade and international tourism would be fully realized.

“Just imagine the potential of Mindanao without the bombing, violence and conflict,” Roxas said in an interview after the gathering. “It’s very big,” he said.