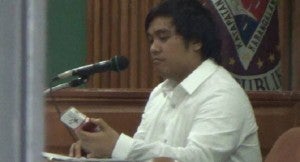 MANILA, Philippines—The Office of the Ombudsman has been accused of sparing Benhur Luy’s friends and relatives from charges even after Luy himself admitted that he had used them as incorporators in one of the bogus non-government organizations linked to the pork barrel scam.

During the bail hearing of Janet Lim-Napoles, the alleged mastermind behind the scam, her lawyer Stephen David said Luy’s relatives, friends, classmates, even churchmates were not included in the charge sheet.

Napoles was at the Sandiganbayan Thursday to hear her petition for bail on a plunder case.

David was referring to the Social Development Program for Farmers Foundation Inc. (SDPFFI), one of Napoles NGOs which Luy had managed.

Lawyer Ryan Medrano, Ombudsman field investigating officer, who testified as the prosecutor’s witness, said they were not charged because they were only used as fake incorporators and their signatures were also forged.

He also said Luy claimed in his sworn affidavit that he had used people without their permission.

“We found it not necessary to charge these people,” Medrano said.

But David accused the Ombudsman of being partial and biased in their filing of cases.

He said the Ombudsman seemed to be only taking its cue from Luy’s statements.

“And so you did not charge these people because Benhur Luy told you so?… So as a lawyer, you will believe everything Benhur Luy tells you?” David asked.

Luy is Napoles’ entrusted finance officer who turned his back on his former employer after he was allegedly detained by Napoles on suspicions that he was starting his own scam.

Napoles, along with senators and their aides, faces plunder and graft charges for the alleged diversion of public funds through bogus foundations to ghost projects for kickbacks.