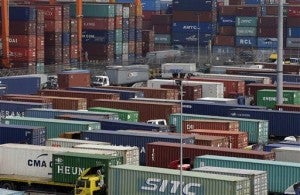 The Cabinet Cluster on Port Congestion said that efficiency at the Port of Manila (pictured) has increased two weeks after the city of Manila lifted its controversial truck ban. AP FILE PHOTO

MANILA, Philippines–The Cabinet Cluster on Port Congestion (CCPC) said that efficiency at the Port of Manila has increased two weeks after the city of Manila lifted its controversial truck ban.

The CCPC, headed by Cabinet Secretary Jose Rene Almendras along with the heads of the Departments of Finance, Trade and Industry, Public Works and Highways, Agriculture and the National Economic and Development Authority, said port operations had significantly increased its efficiency and productivity which they could not do during the implementation of the truck ban.

According to the cluster that also include the Philippine Ports Authority, the Philippine Economic Zone Authority, the Metro Manila Development Authority and the Land Transportation Franchising and Regulatory Board, “while yard utilization remains relatively high, productivity and efficiency are slowly getting back to normal in both Manila ports.”

It was referring to the Manila International Container Terminal (MICT) and the Manila South Harbor (MSH).

“We have already posted a 25-30 percent increase in the movement of cargoes to and from the port since Sept. 13,” Almendras said in the statement.

“The port operators are now working full-blast in its bid to reach the target yard utilization level in time for the expected influx of boxes brought about by the run-up to Christmas,” he added.

“More shipping lines are also now using the port of Subic and Batangas after being declared as extensions of Manila, which we expect to facilitate the decongestion of the Manila ports,” Almendras said.

The two port operators are stepping up efforts to relocate Customs-cleared ready-to-go containers to Subic, Batangas and Cabuyao in Laguna after being slowed down by two typhoons that hit Metro Manila for two consecutive weekends in September.

“With the imposition of the higher storage fee starting Oct. 2, we expect to see further reduction of the volume of containers currently inside the two Manila ports,” he said.

The Cabinet Cluster on Port Congestion is targeting an 80 percent yard utilization level or approximately 64,800 20-foot equivalent units (TEUs) inside the ports to have enough room for optimum terminal efficiency and productivity.

“We continue to appeal to the public to remain considerate as we are already in our full-blast efforts in decongesting the ports. We guarantee that the benefits after decongesting our ports will outweigh all the inconveniences they encounter if we have a congested port,” Almendras said.