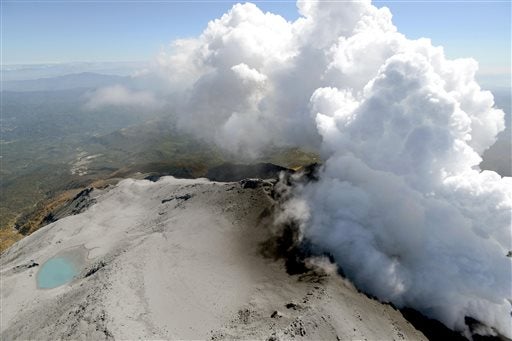 TOKYO — Rescue operations on a Japanese volcano were halted for the day Tuesday because of fears there could be a fresh eruption, officials said, with at least 24 bodies still on the mountain.

Helicopters were ordered to remain on the ground while troops, firefighters and police were stood down for the day, having done no real searching since the operation was suspended Monday because of rocketing levels of toxic gas near the still-fragile peak.

“Both ground and air rescue operations have been called off today,” said an official of Nagano Prefecture’s crisis-management office after volcanologists reported increasingly violent tremors at the site early in the day.

Rescue workers had begun climbing early Tuesday to try to reach the bodies of at least two dozen people who were among the 36 known to have died when Mount Ontake burst angrily to life on Saturday while thronged with hikers.

But they were ordered to stand by when scientists noted increasing vehemence in the volcanic earthquakes on the 3,067-meter (10,121-foot) Ontake, leading to fears it could erupt again.

“There are people still out of contact, although the police, firefighters and the Self-Defense Forces have been conducting all-out rescue efforts despite the ongoing volcanic activity at Mount Ontake,” he noted in parliament.

“The government will continue its utmost rescue efforts with the cooperation of all organizations concerned,” he said.

Officials have warned the death toll could rise because several people remain unaccounted for, although some of them could be among the dead still on the mountain.

Saturday’s natural disaster came just a month after more than 70 people were killed in huge landslides triggered by heavy rainfall in the western city of Hiroshima.

“In light of experience from these disasters, the government is all united to take disaster-prevention measures including development of necessary laws to protect people’s life and property,” Abe said.

Ontake erupted without warning during a busy hiking weekend, spewing gas, rocks and ash high into an autumn-blue sky.

Hundreds of hikers were caught on the slopes of the volcano, with dozens trapped on the peak by flying rocks and hot, toxic gases.

Volcanic tremors have been detected constantly since Saturday’s eruption, with underground water boiling into steam and breaking or moving rocks, a volcanologist at the meteorological agency said.

“The shakes became bigger (early Tuesday), prompting worries over possible secondary casualties” if there is a fresh explosion, he said.

Search operations have been hampered throughout by rocketing levels of poisonous gas pouring from the volcano.

A Japanese army official who took part in the search has said rescuers have been wearing helmets, bullet-proof vests, goggles and masks to protect themselves from any fresh eruption.

The meteorological agency has warned that volcanic debris may settle as far as four kilometers (2.5 miles) from the peak.

Japan’s volcanoes: Could Fuji be next?