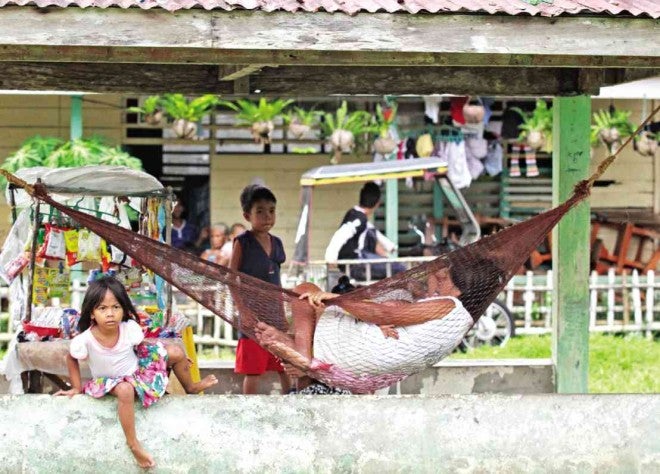 LEGAZPI CITY—The Philippine Institute of Volcanology and Seismology (Phivolcs) said on Sunday that if Mayon Volcano’s activity continuously decreases and deflates in two weeks, then the alert level will be lowered.

“We are considering the so-called ‘lull before the storm effect’ (a period of mild activity for Mayon Volcano before the big one) amid minimum activity of Mayon. We are maintaining the alert status to [stop] evacuees [from] returning [to] their houses, especially in the danger zone. At the very least, we need one week or two to see the consistent changes as it continually decreases. But as of now, there’s still high activity considering the parameters,” Phivolcs science research specialist Paul Karson Alanis   said at a briefing on Sunday.

The Phivolcs bulletin on Sunday showed that magma was moving slowly as only two volcanic earthquakes and four rock fall events were detected during the past 24 hours, while sulfur dioxide flux increased to 1,265 tons per day compared to 680 tons per day on Sept. 26.

Mayon Volcano showed magma movement on Sept. 25 after a week of lull.

Alanis said the huge lava dome that had formed just beneath the crater of Mayon Volcano was believed to be a remnant of the 2009 eruption that acts as a “volcanic plug” that could burst with tremendous force when the volcano erupts.

“The lava dome that makes the crater partially closed is not advantageous because sometimes it can lead to an explosive eruption as the magma can build up more pressure inside,” Alanis said.

He said the volcanic materials that Mayon has so far released since it started getting restive on Sept. 15 and the 855,000-cubic-meter lava dome under its mouth were remnants of the previous eruption.

“The remnant of the 2009 eruption [serves as a] plug, which means the crater has been blocked. Before an eruption, the lava dome at the crater must first be cleared. The new magma can’t go out if there are still old materials that have hardened and plugged the crater,” he explained.

This “old material” is actually a lava dome about 40-story high and equivalent to some 85,000 truckloads of boulders,   Phivolcs scientists said in earlier briefings.

Alanis said the volcanic plug occurred when the magma hardened, or became a lava dome, and got trapped at the “throat” of the crater.

Meanwhile, the Department of Health has realigned P4 million of its regional funds to repair 869 toilets and baths in the evacuation centers, mostly school buildings that were turned into shelters for at least 55,000 evacuees.

Dr. Nathaniel Rempillo, Albay health officer, said that in the 44 evacuation centers the province has set up, only 842 toilets were working and 869 others needed repair.

“Based on the sanitation code of the Philippines, the ratio is 50 persons per toilet. But in our situation, we have limited facilities to serve the evacuees. This is one of our priorities aside from drinking water and other health needs,” Rempillo said.

He said they also needed to regularly deliver at least 48,000 liters of drinking water to the different evacuation camps.

“We do not see water for domestic use as a problem because we have 207 water sources. We are focusing on the drinking water since we have only eight water filtration machines,” he said.

Since last week, Rempillo said they had deployed 378 nurses to monitor health stations at the evacuation centers.