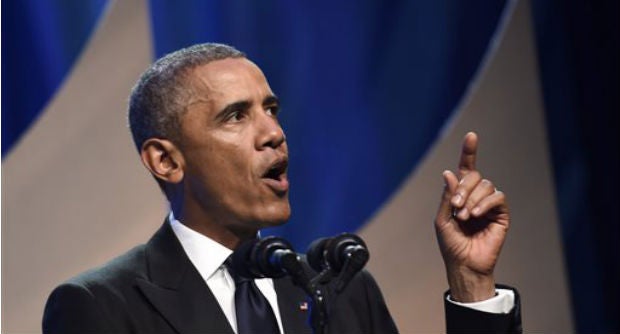 President Barack Obama speaks at the Congressional Black Caucus Foundation’s 44th Annual Legislative Conference Phoenix Awards Dinner in Washington, Saturday, Sept. 27, 2014. Obama told the audience that the mistrust of law enforcement that was exposed after the fatal police shooting in Ferguson, Missouri, has a corrosive effect on all of America, not just on black communities. AP

WASHINGTON — US President Barack Obama said the widespread mistrust of law enforcement that was exposed by the fatal police shooting of an unarmed black man in Ferguson, Missouri, is corroding America, not just its black communities, and that the wariness flows from significant racial disparities in the administration of justice.

“It makes folks who are victimized by crime and need strong policing reluctant to go to the police because they may not trust them,” he said. “And the worst part of it is it scars the hearts of our children,” leading some youngsters to unnecessarily fear people who do not look like them while leading others to constantly feel under suspicion no matter what they do.

The fatal shooting of 18-year-old Michael Brown in August sparked days of violent protests and racial unrest in predominantly black Ferguson. The police officer who shot Brown was white.

There was even more violence Saturday night in Ferguson when, the authorities say, a police officer was shot in the arm. Circumstances surrounding the latest incident were not immediately clear.

Obama addressed the Michael Brown shooting carefully but firmly, saying the young man’s death and the raw emotion that sprang from it had reawakened the country to the fact that “a gulf of mistrust” exists between local residents and law enforcement in too many communities.

“Too many young men of color feel targeted by law enforcement — guilty of walking while black or driving while black, judged by stereotypes that fuel fear and resentment and hopelessness,” he said.

He said significant racial disparities remain in the enforcement of law, from drug sentencing to applying the death penalty, and that a majority of Americans think the justice system treats people of different races unequally.

Obama opened his remarks by singling out Attorney General Eric Holder for praise. Obama announced Holder’s resignation days earlier after nearly six years as the nation’s chief law enforcement officer. Holder, who attended the dinner and received a standing ovation, will stay on the job until the Senate confirms a successor.

Holder visited Ferguson after the shooting to help ease tensions, and the Justice Department is investigating whether Brown’s civil rights were violated.

Obama also announced that he is expanding My Brother’s Keeper, a public-private partnership he launched earlier this year to help make young minority men’s lives better. He said a new “community challenge” will task every community to put in place strategies to ensure that young people can succeed from the cradle through college and career.

Obama said government cannot play the primary role in the lives of children but it “can bring folks together” to make a difference for the young.

Helping girls of color deal with inequality is also important, he said, and part of the continuing mission of the White House Council on Women and Girls, an effort that has involved his wife, Michelle, mother of their two teenage daughters.

“African American girls are more likely than their white peers also to be suspended, incarcerated, physically harassed,” Obama said. “Black women struggle every day with biases that perpetuate oppressive standards for how they’re supposed to look and how they’re supposed to act. Too often, they’re either left under the hard light of scrutiny, or cloaked in a kind of invisibility. ”