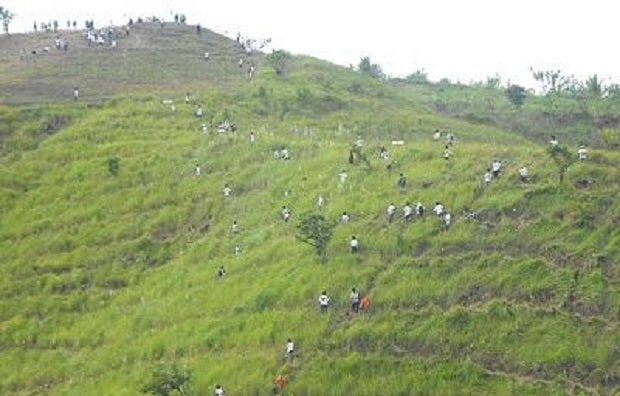 An army of 160,000 people join ‘TreeVolution’ in Mindanao. Photo by Saranggani PNP

MANILA, Philippines—Philippine officials said Saturday they had set a new world record for the most trees planted in an hour, with 3.2 million seedlings sown as part of a national forestation program.

Official certification from Guinness World Records will still take weeks but government officers expressed confidence they had broken the old record of 1.9 million trees planted in India on August 15, 2011.

The trees were planted in six different areas on the southern Philippine island of Mindanao by an army of 160,000 people including government employees, students and volunteers, said the regional environment director Marc Fragada.

“Our official count is about 3.2 million trees in one hour. But we are still getting reports. We still have to prepare the packaging of documentary evidence (for Guinness),” he told AFP.

The trees planted were a mix of forest varieties as well as commercial crops like cacao, coffee and rubber trees, he said.

“They were chosen by the planters in hopes that the local people will take good care of them because it will be part of their livelihood,” he said.

The organizers had originally targeted 4.6 million trees to be planted in one hour, said Environment Undersecretary Demetrio Ignacio.

“Based on our count, we have planted more (than India) but whether the record is broken, only Guinness can say that,” he told AFP.

The Philippine archipelago, once densely-forested, has lost much of its forest cover due to development, logging and slash-and-burn farming.

President Benigno Aquino has launched a program to reverse that, targeting the planting of 1.5 billion trees in 1.5 million hectares before he steps down in 2016.