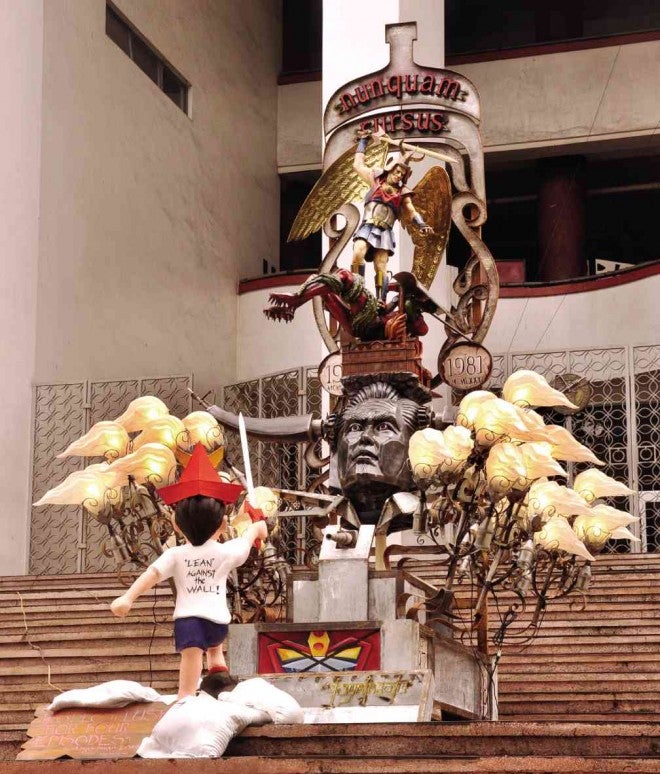 “LAST, Lost, Lust for Four Episodes,” a 13-foot sculpture by Toym Imao stands in front of the University of the Philippines’ Palma Hall in Quezon City. The artwork in brass, galvanized iron and fiberglass will be on display until Sept. 28, the 25th death anniversary of Ferdinand Marcos. CONTRIBUTED PHOTO

I was in third grade in 1978 when “Voltes V,” a Japanese animated series, first aired on Philippine television.

“Voltes V” ushered in the “Super Robot” era, which spawned a legion of devout followers who were glued to their TV sets every Friday to catch the unfolding saga of the Armstrong family against the Boazanian empire ruled by a despotic emperor bent on conquering the earth.

“Beast Fighters,” the Boazanians’ weapon of choice, went on destructive rampages on Earth and ultimately battled with Voltes V and his laser sword.

Each day of the week, different robot shows were aired—“Mazinger Z,” “Daimos,” “Mekanda Robot,” “Grendizer” and “Dunguard Ace,” to name a few. They captured the imagination of a predigital generation.

Wonderful time to be a kid

The zeitgeist was a future with robots and spacemen, and fandom was translated to acquiring the toy robots, action figures, shirts, magazines and stickers, which proliferated during that period.

It was a wonderful time to be a kid then—until they were seized through a directive by the Marcos government. “Voltes V” and the other robot animes where banned from airing nationwide because of their alleged “excessive violence.”

An entire generation was heartbroken that the last four episodes of “Voltes V” were never aired. After watching the travails and triumphs of the Armstrong family, viewers never got to see what was supposed to be the triumphant overthrow of an evil empire, and the return of peace and democracy in both planets Earth and Boazania.

I have created a sculpture—a visual metaphor of the anger I felt as a 10-year-old when Voltes V and the other robots were summarily removed from television. We were left hanging, never knowing how the series ended.

My anger was trained on then President Ferdinand Marcos, who my young mind labeled as the Philippines version of the evil Boazanian Emperor.

At first it was only because he deprived me of a favorite TV character. And then a sort of political awakening happened. Suddenly, I was affected by what grownups were talking about: Martial law.

I became more aware of my parents’ work as volunteers in the opposition machinery headed by then Ninoy Aquino and the Laban (Lakas ng Bayan) party due to our friendship with National Artist for Literature Alejandro Roces. I helped in making opposition posters and paraphernalia against our very own Boazanian Emperor/President.

I played the role of Earth defense forces, and the rebellious nonhorned slave race in Boazania eager for liberation and freedom.

President Marcos is depicted as the Boazanian Skull with Horns starship—the iconic “Sky Rook.” The horns are the stylized front end of an M16 machine gun. The wings are based on the 1960s T-28 planes, nicknamed the tora toras, which were extensively used in counterinsurgency strafing operations in the ’70s and during the several coup attempts against President Cory Aquino in the mid-’80s.

On the crest of the head is a depiction of four structures: at the front is Malacañang, on its sides are the Batasang Pambansa and the Bataan Nuclear Power Plant and at the back is the Cultural Center of the Philippines.

The middle area is populated by representations of industrialization via different chimneys. These iconic structures associated with the late dictator, each having their own unique narratives on how the state has appropriated their resources of what the Marcos envisions as his “New Society.”

The top depicts the classic battle waged between good and evil, an angel against the devil, inspired by the Ginebra San Miguel bottle art. Archangel Michael dons a Voltes V-inspired armor and draws his laser sword against a four-armed representation of a riot police and the Constabulary, armed with a metal truncheon and a .45-caliber pistol, with antiriot shields as his wings.

The entire sculptural totem visually suggests a sort of altar statuary composition similar to a carroza, lighted by an assemblage of Molotov bombs. It incorporates characters from the “Voltes V” series as representation of the Philippine experience under martial law.