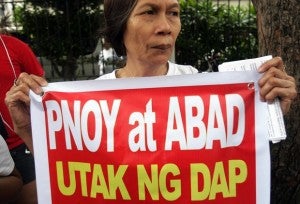 MANILA, Philippines – The lawmaker wife of Budget Secretary Florencio Abad hit back at her critics who accused her of being favored by her husband in the allocation of funds from Aquino’s Disbursement Acceleration Program (DAP).

Batanes Rep. Henedina Abad was cited on the list of opposition congressman Toby Tiangco as being the sixth largest DAP beneficiary with P176.6 million.

Mrs. Abad said she has never asked her husband for DAP funds.

“We rarely see each other. The time we are together, we don’t want to talk about work anymore. But of course nobody will believe that,” Mrs. Abad said.

She denied being a favorite of Abad in budget allocation.

“Nahihiya nga ako humingi eh. But (the constituents) come to us (for help),” Mrs. Abad said.

She also lamented being always identified as the wife of the budget secretary.

“That is not sometimes fair. I am always identified the wife. Sometimes they forget my name,” Mrs. Abad said on Thursday.

She appealed to critics to be fair in their comments about her.

“It’s part of the job, being in the administration. Sana, be fair in framing the issue. Minsan character assassination na eh,” Mrs. Abad said.

DAP, Budget Secretary Abad’s brainchild, is meant to stimulate the economy by impounding savings. It was perceived as Malacañang’s version of the pork barrel.

The Supreme Court declared some practices under DAP unconstitutional. Senator Jose “Jinggoy” Estrada, who is detained over the pork barrel scam, had also bared in a privilege speech that funds from DAP were given as incentives to senators who voted to convict ousted Chief Justice Renato Corona.

Navotas Rep. Tiangco’s list of legislators who were the top DAP beneficiaries was based on the DAP documents uploaded in the Department of Budget and Management website.

All of the top 10 belonged to the ruling Liberal Party. Many recipients were also allied with the President.