MANILA, Philippines—A whistleblower in the pork barrel scam told the Sandiganbayan Thursday that she has no proof that Janet Lim-Napoles controlled the bogus foundations used to pillage public funds for kickbacks. 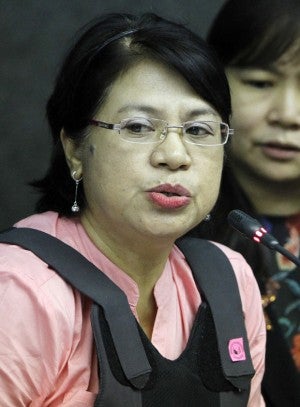 Whistleblower Marina Sula, who worked for Napoles as custodial officer and janitor, took the witness stand during Senator Ramon Revilla Jr.’s bail hearing from plunder over the pork scam.
Sula said she that she had no written proof that Napoles controlled the purported bogus non-government organizations (NGOs) allegedly used as dummy fronts for the implementation of ghost projects using lawmakers’ Priority Development Assistance Funds (PDAF).
She said, however, that the presidents of these NGOs acted upon the verbal instructions of Napoles.Sula was appointed president of Masaganang Ani Para sa Magsasaka Foundation Inc. (Mamfi), one of the alleged Napoles-controlled NGOs.

Sula also said her only set of proofs that Napoles controlled these NGOs – notebooks which supposedly documented these NGOs’ transactions – went to trash after the businesswoman ordered the notebooks shredded at the height of the investigation.

Another whistleblower, Napoles’ book keeper Mary Arlene Balthazar, also testified that Napoles ordered her employees to shred all the documents of transactions by JLN Corp.

She as a certified public accountant also admitted to making “arbitrary accounts” – or financial statements without basis – for JLN Corp., which she alleged to have been used as a dummy corporation for anomalous transactions.

“I prepare a whole year of schedule and services para mapakita na may income ang JLN Corp…. (But there is) no basis. Walang transactions,” Balthazar said.

She also testified that Napoles had ordered them to shred JLN documents in two occasions – before and after principal whistleblower Benhur Luy was rescued from illegal detention.

Luy is Napoles’ entrusted financial officer who turned his back against Napoles after she detained him on suspicions that Luy is starting his own scam.

Balthazar said in the first instance, they used three paper shredders to destroy documents of evidence.

The shreddings were stashed in 20 double extra-large garbage bags daily, and were finished in a week’s time, she added.

In the second instance, Balthazar said Napoles bought seven more shredders. They were able to collect 40 garbage bags of shredded documents every day in their two weeks of work, she added.

Balthazar was appointed president of Tanglaw Para sa Magsasaka Foundation, another of the suspected Napoles-controlled NGOs.

Revilla, and fellow senators Jinggoy Estrada and Juan Ponce Enrile face plunder and graft charges for their alleged involvement in the pork barrel scam, the purported diversion of senators’ Priority Development Assistance Funds (PDAF) to ghost projects for kickbacks. Revilla and Estrada are detained at the Philippine National Police Custodial Center, while Enrile is in the PNP General Hospital while under custody pending his motion for hospital arrest.

Napoles, meanwhile, also faces plunder raps over the scam. She is detained in the Camp Bagong Diwa female dormitory with Atty. Jessica Lucila “Gigi” Reyes, Enrile’s resigned chief of staff and a co-accused in the plunder case.