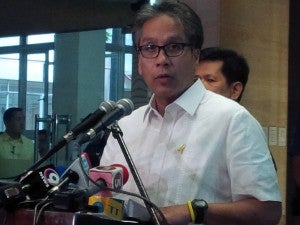 Roxas submitted to the Senate committee on finance a report  by police director in-charge of  the  comptrollership, Rolando Puruggunan, recognizing the receipts of donations used for the repair of the so-called White House.

“So it was received by the PNP through a debit to other structures amounting to P11, 462, 745,” he told the committee, responding to queries of Senators  Francis Escudero and  Grace Poe.

“And there’s a deed of donation entered into by Mr. Carlos Gonzales for Ulticon Builders, Atty. Alexander Lopez for Pacific Concrete Corporation, Christopher Pastrano of CAPP Industries as the donors  and Director General Purisima for the PNP as the donee or recipient of the renovated exclusive official residence of the chief PNP,” Roxas said.

He then gave the committee a copy of the report, which he said has already been submitted to the resident auditor at the Camp Crame.

When Poe asked if the donation was only P11 million but the structure cost P20 million, Roxas said: “I think the P20 million is a number that has been brooded about, Madam Senator. This appears to be an itemized…”

It was Poe who first raised about the issue during the hearing but Roxas said he was not aware of the specifics, saying  that Purisima would be the one who would  make a list of all the donors.

But Roxas eventually  gave the list to the  committee which he said he saw for the first time after Escudero pressed for answers on the  white house issue.

“Since this is an official structure within  Camp Crame, shouldn’t the PNP hierarchy and leadership be privy to this?” Escudero asked.

It was then that Roxas informed  the committee about Purugganan’s report pertaining to the said donations to the  PNP.