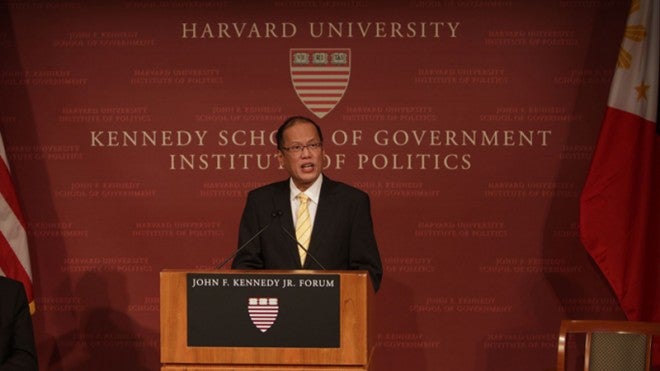 CAMBRIDGE, Massachusetts—President Aquino on Monday encouraged critics to file charges against his allies if they believed these officials had strayed from his reformist programs.

“The courts are open. If they think that I have dishonest people around me, then all they have to do is file an appropriate case,” Aquino said, responding to a question from a student during a forum that followed a policy speech at Harvard University’s John F. Kennedy School of Government.

“The Ombudsman in particular, I think, even investigates instances where complaints are unsigned or anonymous precisely to ferret out those who are not treading the correct path,” he added.

Aquino kept mum on whom his anointed one would be in the 2016 presidential election, a topic that had hounded him for over a month now since Malacañang floated the idea that he was open to a second term.

“I really believe we have a lot of material in the country. But if I were to mention them now, then I’m sure you can… You can imagine the repercussions back home and the media frenzy,” Aquino said, drawing laughter from the crowd.

Aquino said that he still had about a year and nine months to go in office and “we shouldn’t allow the distraction of the election to interfere with our obligations to our people.”

In his policy speech, the President recalled the country’s struggles during the martial law regime, his father’s fight against the dictator Ferdinand Marcos and how ultimately the Philippines was reaping the gains of democracy through good governance under his administration.

During the open forum, Aquino was asked about the territorial dispute with China. The President said: “Our Constitution tells me that I cannot give up our sovereignty. I have no leeway in that matter… If we don’t fight for our rights, we don’t expect anybody else to fight for them.”

He disclosed that he was “about to pass the antidynasty law in furtherance of the Constitution… At the end of the day, new blood has to bring new ideas, new methodologies, new energies that perhaps can improve on that which was already set.”

The President said that the Enhanced Defense Cooperation Agreement with the United states would allow the Philippines “access to all of these 21st (century) technology.”

The lively discussion was nearly spoiled by a man who asked him, “Why would you buy arms knowing that it does not create jobs nor does it expand the economy of the Philippines?”

Aquino explained that the Armed Forces of the Philippines has had to contend with Vietnam-era weapons for many years and recently purchased 50,000 new rifles for the troops.

He added that 80-year-old ships were protecting the country’s 36,000-kilometer coastline, and that there was a need for helicopters and other aircraft to have interconnectivity among the Philippines’ 7,100 islands.

He said these were also needed for humanitarian and disaster relief operations.

But the man would not have any of Aquino’s answers and continued to debate with him even off the microphone. A member of the Secret Service and the Harvard Police were seen walking up the stairs in the auditorium toward the heckler.