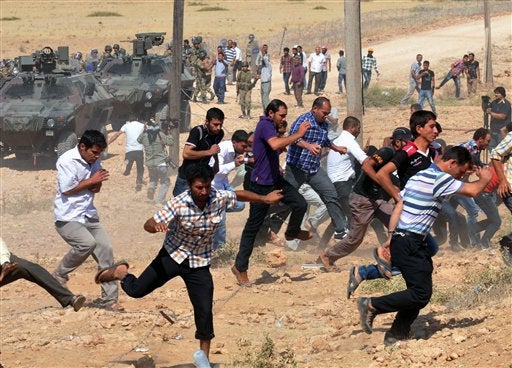 Local people clash with security forces in Suruc, Turkey, Friday, Sept. 19, 2014, before Turkey opened its border to allow in up to 4,000 people who massed on the Turkey-Syria border, fleeing the Islamic militants’ advance on Kobani – a day after officials prevented them from crossing in and Turkish prime minister Ahmet Davutoglu said Turkey, which is already host to some 1.2 million refugees from Syia, would provide the group with help on the Syrian side of the border. AP

ANKARA, Turkey — The number of Syrian refugees who have reached Turkey in the past four days after fleeing the advance of Islamic State militants now totals 130,000, Turkey’s deputy prime minister said Monday.

Numan Kurtulmus said Turkey is prepared for “the worst case scenario” should more refugees stream in.

The refugees have been flooding into Turkey since Thursday, escaping an Islamic State offensive that has pushed the conflict nearly within eyeshot of the Turkish border.

The al-Qaeda breakaway group, which has established an Islamic state, or caliphate, ruled by its harsh version of Islamic law in territory it captured straddling the Syria-Iraq border, has in recent days advanced into Kurdish regions of Syria that border Turkey, where fleeing refugees on Sunday reported atrocities that included stonings, beheadings and the torching of homes.

Although the numbers are high, Turkey says it is ready to react: the conflict in Syria has pushed more than a million people over the border in the past 3 and a half years.