Nene Pimentel quits from Makati U yet again 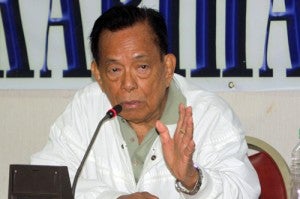 MANILA, Philippines — For the second time, former Sen. Aquilino “Nene” Pimentel Jr. has found himself out of the University of Makati (UMak), this time due to the ongoing Senate investigation being spearheaded by his son, Sen. Aquilino “Koko” Pimentel III, into alleged overpricing in the construction of the Makati City Hall building annex.

In a radio interview on Sunday, Pimentel said he had once more decided to leave UMak because the Senate blue ribbon subcommittee’s hearings into corruption allegations hurled against Vice President Jejomar Binay and his son, Makati Mayor Junjun Binay, had put him in a complicated spot.

The Senate blue ribbon subcommittee inquiry has heard allegations by former Makati officials that bids were rigged to favor certain suppliers, and that then Mayor Jejomar Binay had received kickbacks from infrastructure projects.

Binay, who has said the allegations were all hearsay, has been formally invited to this week’s Senate hearing, but his spokespersons have criticized the proceedings as a kangaroo court.

“If I do not leave and, for example, Vice President Binay is cleared of the accusations against him, the people might say he was cleared because Koko’s father is in UMak.

“If he is not cleared, the people will say, what is he doing in UMak when he was unable to help Vice President Binay? So I decided to leave,” said the former senator said in the interview.

Pimentel, in a separate phone interview, said he first resigned in August from the Center for Local Governance named after him at UMak, a tertiary institution run by the Makati City government.

He said he quit after Vice President Binay left the Partido Demokratiko Pilipino-Lakas ng Bayan (PDP-Laban), the party the two of them had formed three decades ago.

But Pimentel agreed to return after Binay implored him not to let politics get in the way of the good programs Pimentel had been conducting at UMak.

The current Senate investigation was another matter, however, Nene Pimentel said.

“This time it’s difficult because the issues are heavier than just partisan politics,” he said.

He is now looking for another office for the center, but in the meantime, he said the center’s programs had not stopped. It is scheduled to hold a “Batang Transformer” seminar in October, where Christian and Muslim children will work together to learn leadership skills.

“The work of the Pimentel institute will continue,” he said.

He said he did not consult his son or Binay on his decision to leave UMak.

“I don’t want to meddle in Koko’s work in the Senate, because he has to do what is right, and not because of what his father says,” he said.

As for Binay, Pimentel said he should answer all the issues against him, preferably in the Senate.

“I don’t want to give advice to the Vice President, but it would probably be better if he can answer the questions, especially in the forum established by the Senate. But that is his call,” Nene said.

Binay has right not to appear at Senate hearing—Macalintal