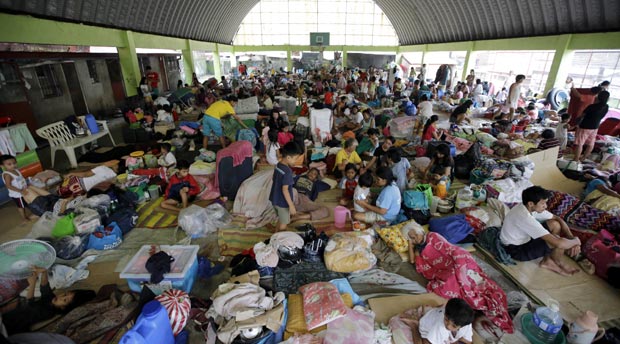 MANILA, Philippines—Thousands of people displaced by floods triggered by Tropical Storm “Mari” (international name: Fung-Wong) returned to their mud-caked homes in Metro Manila Saturday, as the death toll from the disaster rose to five, officials said.

Heavy rains paralyzed the sprawling metropolis of more than 12 million people and nearby regions on Friday, with roof-high floods chasing 83,000 people from their homes, according to the National Disaster Risk Reduction and Management Council.

“We have no choice but to come back. We can’t afford to rent an apartment,” butcher’s wife Lovi Barbosa, 35, told AFP as she attempted to remove dirt from the floor of her home near a still swollen creek.

She said she and her five children, aged between two and 10, spent a sleepless night sat on the cold floor outside a tire repair shop because the local school was already full of similarly displaced neighbors.

Three weeks’ worth of rain swamped the region on Friday, state meteorologists said, as the eye of the relatively weak storm brushed past the northern tip of the main island of Luzon, more than 400 kilometers (250 miles) away.

The state weather service said Mario was forecast to hit Taiwan on Sunday.

Many of the areas hardest hit by floods, such as Barbosa’s neighborhood, are shantytowns illegally occupying the banks of rivers and other waterways.

“Generally, the floods have already subsided. People are starting to return to their homes,” Alexander Pama, executive director of the disaster council, said Saturday.

The bad weather left five people dead and one missing, he told a news conference.

The storm itself caused power outages across northern Luzon, while rough seas left a small ferry off the central port of Cebu badly damaged on Friday, Pama added.

An average of 20 typhoons or major storms hit the Philippines each year, killing hundreds and bringing misery to millions.

In September 2009, Tropical Storm “Ondoy” (Ketsana) dumped a month’s worth of rain across Manila in just six hours, unleashing the worst flooding in the capital in four decades and killing more than 460 people.