MANILA, Philippines—Storytellers said their piece on peace during Saturday morning’s Inquirer Read-Along session that brought together a distinguished educator and two outstanding men in uniform.

The three read Bimbo Papasin’s “Ang Batang Nangarap ng Kapayapaan,” a story about a little girl who helped bridge peace among rebels and soldiers in Mindanao.

“It was an overwhelming experience that we were able to share with them lessons in life which they could carry out as they grow older,” said Galarion on reading stories of peace to children.

About 30 children from F. Benitez Elementary School and Virlanie Foundation took part in the session.

“We were able to explain to them the essence of peace and what they could do to contribute to that advocacy,” said Dacayanan.

“It has been a while since I shared stories with kids, which are mostly about police matters,” said Dumangeng. “But this time, it’s a different one and it felt surreal to be able to tell them a story that would truly inspire them.”

As a soldier, Dacayanan said he could relate to the story he read, with the ongoing peace talks between armed conflict involving separatist groups and the government.

“Mindanao is called the promised land because of its fertile land and rich resources,” said Dacayanan, Group Sergeant Major of the Military Intelligence Group 22 of the Intelligence Service of the Armed Forces of the Philippines. “However, we can’t maximize its use and see its beauty because of its peace and order situation.” 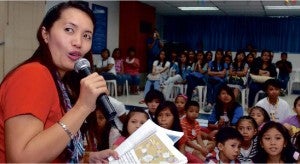 “If only it were as easy as dedicating garlands of flowers to leaders of opposing parties just for them to end their differences,” said Dumangeng, who is assigned in the municipal station of Sta. Rita in Pampanga.

Galarion said they saw themselves in the story, which features a teacher and law enforcers.

“When students are affected by war, it is the role of the teacher to encourage them to stay hopeful,” said Galarion, master teacher at Angeles City National High School in Pampanga.

Galarion said even children, in their own simple ways, can contribute in promoting peace.

“It starts with the parents and the school, who mold them to become responsible citizens so they can contribute in our society,” Dacayanan said.

Sophia School teacher Lorna Darilag, a Read-Along regular, read Rene Villanueva’s “Ang Dalawang Haring Siga,” a story about two kings who are always in conflict with each other and how they eventually decide to end their perpetual war to attain lasting peace for their grandchildren.

Tan said she continues to practice her storytelling skills even after the competition. She bested four other contestants in the storytelling finals held at the Read-Along Festival in November last year.

“I still feel nervous when I am on the stage. But I still give my best to share the story well,” she added.

More than 30 Education students from the Laguna State Polytechnic University also attended the session as observers. The students, who are taking up elementary education courses and developmental reading classes, took today’s session as an experience to learn how to utilize storytelling as a tool for teaching lessons.

“Through the stories, I hope the children became more open-minded and learn that with different situations, there are different solutions too. That way, they can be more adaptive and learn to associate better with others,” said Hazel Molino, 20.

“Through the stories read today, I hope the kids learned that even though they are young, they can still contribute in making their families and the society around them live more peacefully,” said Noreen Reyes, 21.