Over question of quorum, Binay, Aquino allies square off in House of Reps 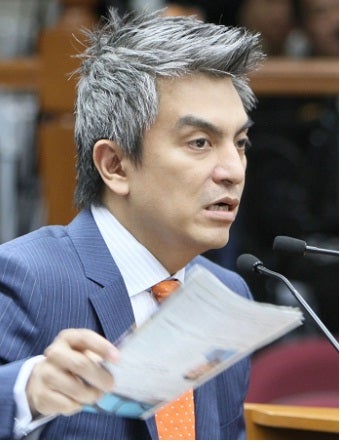 MANILA, Philippines—Two representatives, one allied with President Benigno Aquino III while the other with Vice President Jejomar Binay, almost got into a scuffle over an argument about quorum in the House of Representatives.

On Wednesday night, United Nationalist Alliance (UNA) Secretary General and Navotas Rep. Toby Tiangco moved to adjourn the budget hearings of the Department of Justice in the plenary as he claimed there wasn’t enough solons present in the floor.

Tiangco of Binay’s party then went up to Gonzales and pointed a finger at him. At one point, Tiangco also tried to shove off the Aquino ally.

Gonzales, a member of Aquino’s Liberal Party, appeared to look more at ease despite the altercation and tried to keep his distance from Tiangco. The Binay ally however kept tailing him. Quezon City Rep. Jorge Banal stepped in to stop the confrontation.

In an interview on Thursday morning, Tiangco said he tried to block Gonzales when the latter was heading to the presiding officer to suspend Wednesday’s session.

Tiangco said he wanted to adjourn Wednesday night’s session because he wanted to put on record that Budget Secretary Florencio Abad failed to provide the solon the complete report on the controversial Disbursement Acceleration Program (DAP).

DAP is Abad’s brainchild which critics call the President’s version of the pork barrel. Some practices under DAP were declared unconstitutional by the Supreme Court.

He said Abad’s commitment to provide the DAP report was also put on record in the House journal.

(I want the session to be adjourned last night so I will have it on record that the agreement was not met… I hope we don’t reach the point that there was a commitment on record but the commitment won’t be met. Will we allow us to be disrespected?)

The majority leader also said the secretariat requested to suspend and not adjourn the session, because adjourning would compel the secretariat to prepare the journal overnight in time for Thursday’s session.

“Maawa naman kami sa kanila na pag ganyang kahaba ang proceedings, huwag kaming maga-adjourn because pag nag-adjourn kami, when we resume (tomorrow)… we will effectively force our secretary to sleep over to prepare the journal in time for the opening today,” Gonzales said.

(We should pity the secretariat because if we adjourn, they will be forced to sleep over to prepare the journal in time for the opening today.)

He said Tiangco should not let his issues about DAP get in the way of the budget deliberations.

“That is his beef with the Department of Budget and Management… Bakit naman ‘yung entire budget ang mag-su-suffer?… Huwag naman nila i-tie up ang deliberations sa plenary in their agreement (Why would the entire budget suffer?… He better not tie up the plenary deliberations in his agreement with Abad),” Gonzales said.

Gonzales then went to the point of accusing Tiangco of deliberately stopping the budget proceedings to get his way.

He then warned that Tiangco’s actions may result in the re-enacted budget. The Constitution states that if Congress fails to pass the budget bill for the next fiscal year, the budget law of the current year will be deemed reenacted and will remain in force until the budget bill is passed by Congress.

“Be careful what you will wish for, because it might happen. Maybe in the process of delays in the approval of the budget, it will eventually result to a reenacted budget,” he added.

Tiangco scoffed at Gonzales’ accusations, pointing the finger at Abad for causing the delay in the budget approval.

“Ako ba ho ang naghohostage? O si Secretary Abad? Sino ho ba ang nangako? (Am I the one hostaging the budget? Or Secretary Abad? Who ws the one who made the promise?)” Tiangco said.